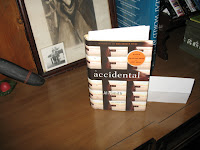 As much as I enjoyed Absolution, am I ever glad that I put Ali Smith on my Around the World in 52 Books challenge. The Accidental is one of the best books I've read this summer, with its echoes of Mark Haddon and David Mitchell (I still think his Black Swan Green has never gotten the attention it deserves; it's a brilliant book), Smith's novel quickly sucks you in with her switching voices, intuitive point of view and tumbling prose. And while she's officially my Scottish writer, and this book is set in England, it's hard to assess whether or not it's an accurate reflection of the chosen country's literature. I'll probably have to delve into Smith's backlist to find out if she's written a book set in Scotland, but after reading The Accidental I'd be surprised if it wasn't on the 1001 Book people's radar and might be included in an updated version years in the future.

The story of the Smart family (daughter, son, stepfather, mother) is told chapter by chapter in each character's voice starting with Astrid (aforementioned daughter), as they spend the summer away from London in a "substandard" vacation house. When a stranger named Amber who has absolutely no connection to anyone in the family, regardless of what everyone in the house thinks, simply walks into their life and starts making changes, she becomes the catalyst that skyrockets the family into a whole other world in terms of their physical and emotional lives.

Each character has a specific, overriding emotional issue: Astrid's being bullied at school; Magnus suffers through a tragedy somewhat of his own making; Michael, the step-father, needs to deal with his, ahem, indiscretions; and Eve, the mother, suffers from a writer's block that bleeds into all aspects of her person. But when Amber bashes into their lives and mashes up their thoughts not only about each other but about the various issues that are pulling them apart and in all different directions. Amber is a hippie, a charlatan, a psychic, a seductress, and her presence finally makes everyone come to terms with the facades that structure even the purest of lives.

On the whole, it took me a long time to get through this book. I picked it up months ago and read 30-odd pages and then put it down. Picked it up again a few weeks later, started from the place I stopped, got confused and gave up. But this weekend at the cottage, after a particularly intense game of multi-language Scrabble, I relaxed before swimming and read the entire book from cover to cover. And I loved it. I really did.

PHOTO IN CONTEXT: I'm proudly displaying the book on my grandmother's sideboard-thingy that has pictures of her tucked into that totally creepy print of my uncle's. Oh, and I think I have the US version of the book because I ordered it through my old work...
at August 16, 2007

And then she went and ruined the whole flippin' book in the last two pages. All these film and cinema references, the power and mutability of flickering light, and then she writes 'the director Ray Harryhausen.' I really loved that book until it felt like she didn't know what she was talking about. So, yes, he directed some shorts based on fables as a young man (with his mother making the costumes, no less) but that's not what he's known for, or the films she was referring to, and yes, this makes me seem like an extraordinarily petty person.

I loved Black Swan Green and Spot of Bother, so I'll have to give this one a whirl.

I adored this, and the impression I've got is that it's hit or miss, so I am pleaed you liked it too. Nice review.

Wow. That wasn't terribly well proofread, was it?

I adored this BOOK, and the impression I get is that it's hit or miss, so I am PLEASED that you liked it too. Nice review too.

I remember considering this one recently and it just didn't make the cut. Now I'm rethinking that position...