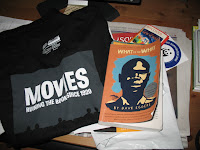 For the first time in my Around the World in 52 Books two-year reading odyssey, I am going to break the rules. You heard me. I'm going to bust them wide open and actually let the setting of the novel define my country choice, and not the author's birth. It's impossible to ignore the fact that the voice in Dave Egger's What is the What seems so completely that of Valentino Achak Deng that to name this my book from the US might do it a disservice.

When I saw Eggers back in November, I was very taken by the social commentary found within his slide show presentation. The idea that China's need for oil propels the terrible situation in Sudan still makes me think twice every time I see a Made In China stamp on just about everything we buy and/or own. But now that I've read the book, I'm thinking more about the accomplishments of its writer and main character, and not just about the social-political underpinnings of the book and its incredibly important message. It's as if it all has a human face now.

Subtitled "The Autobiography of Valentine Achak Deng," What is the What is such a skilled, intense and utterly compelling book that it held my interest through every one of its 535 pages. The structure of the novel develops around an epistolary format reminiscent to an early scene in the book where Achak, still living then with his parents quite happily in Marial Bal, sits with a group of men and listens to them debate 'What is the What.' Achak speaks to a number of different people directly within the novel as he tells his story, the nurse/clerk at the hospital, the boy set to watch him as he gets robbed in his own home, members of the health club where he works, and as a narrative tool, it's ridiculously effective. It's almost as if, as a larger theme, the entire story sets out with the need to find and define 'the What,' an elusive, angry at times, but always tragic quest for Valentino to discover not only his own purpose, but a larger sense of the universe.

It's an unbearably sat, yet utterly uplifting story, as the rebels fight against the Arab government, war breaks out and a country falls apart, and then Achak begins a long, arduous walk to Ethiopia surrounded by hundreds of other Lost Boys. Finally settling at a refugee camp in Kenya called Kakuma, Achak lives with a foster family, receives an education, and finds a decent job before being relocated to Atlanta to start a new life in the United States. The novel opens with a harrowing scene of Valentino being beaten and robbed in his own home, and still, the utter strength of his character remains steadfast. When any number of truly horrible events conspire against him, Achak carries on.

In places, Valentino describes a feeling that tears through him, not that he is cursed per se, but that bad luck has a way of following him around, shadow-like, in every facet of his life. I am not going to lie, and I know it might seem almost shameful for me to have felt akin to him in this way, but for many, many years I fought with the idea that I too must have been cursed in another life to have endured what I have. Nothing, nothing at all compared to Achak's own struggles, I know, I have always had a roof over my head and have never had to walk further then a few blocks to a bus stop, but the feeling that life seems to consistently be a current working against you, well that's something I can absolutely empathize with in more ways than one.

READING CHALLENGE UPDATE: Am declaring What is the What as my book from Sudan and not the United States as I had originally intended, which is good because I think I'd like to read Tom Perrotta's Little Children instead. And because I did not buy my copy of the book, and with all the author proceeds going to Valentino's charity, I went online and made a donation in lieu of the cost of the novel.

PHOTO IN CONTEXT: I want to thank Baby Got Books for linking to the place to buy the t-shirt that had just arrived the day I finished the novel, where it ended up on my desk amongst a whole bunch of mail clutter from when we were away. I also want to give Tim an extra shout-out for saying that I "had" to read Eggers's novel, because he was so very, very right, I did.

I just discovered your blog today as I have a google alert uset p for any bloggers talking about What is the What, as I HAVE to know what people are saying about this book.

This book was one of the most impressionable books I've read in a long time. So important, I wish everybody would read it!

Thanks for a great review.

Hooray for me! Thanks for the plug at the end there. I'm glad that you liked. Nothing is worse than giving a "you HAVE to read it" recommendation only to later learn that the other person didn't like it.