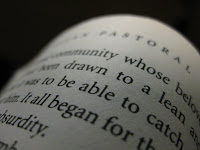 Sometimes I really resent the 1001 Books to Read Before You Die list. Like when you slog through umpteen pages of books like Philip Roth's bloated and self-indulgent masterpiece American Pastoral. I'm honestly shocked that a book that so clearly needed an editor won the Pulitzer Prize. I liken Roth's writing in ways to Canadian David Adams Richards, who remains highly regarded by many people in the literary world (and is ever-acclaimed and never-endingly nominated). It's just not the book for me. Honestly, I'm barely surprised that I finished.

In theory, and at the beginning of my reading experience, I couldn't put the book down. I was fascinated by Seymour "The Swede" Levov, the golden-blond, all-American, football-playing, Riggins-reminding main character. The novel does an excellent job of exploring how his Jewish roots somewhat sit in opposition to his golden boy lifestyle thus setting up this ideal of the American pastoral. In a world where a man, who has worked incredibly hard (he took over his father's glove business) and married a woman he adores (and is a beautiful Irish-American beauty queen), can't even succeed, what hope is there for the rest of us? The Swede's more than a character: he's an archetype, one that Roth's narrator, the bachelor-slash-writer Nathan "Skip" Zuckerman explores in tireless detail.

After a chance meeting at a baseball game when they're both well advanced into middle age, The Swede approaches Skip and asks if he'd like to write a book about his father, Lou Levov. This becomes the premise behind telling the Swede's story. And then retelling it. And then retelling it a little more. And then a little more. Like a record that skips, the book plods along in ceaseless and sometimes utterly unnecessary detail about every aspect of the Swede's life, his relationship with his first wife, Dawn, and their troublesome daughter, Merry.

When Merry's (as described on the jacket) "savage act of political terrorism" destroys the family, much of the novel is dedicated to trying to understand the reasons behind why she did it. The breakdown of the family is never explored in detail, only hinted at, as we discover at the beginning of the book that the Swede has remarried and has three teenage sons. For the majority of the novel, he tries to keep his life on course despite it's consistent derailing. As the nature of tragedy in and of itself is cyclical, I can see why Roth spent so much time writing around and around the events; but it took a sheer force of will for me to finish this book.

I am not, however, giving up. Anyone who can write sentences like Roth deserves a second chance:

Marcia was all talk -- always had been: senseless, ostentatious talk, words with the sole purpose of scandalously exhibiting themselves, uncompromising, quarrelsome words expressing little more than Marcia's intellectual vanity and her odd belief that all her posturing added up to an independent mind. 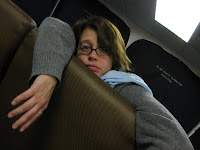 READING CHALLENGES: Yes! A title in my woefully underrepresented 1001 Books Challenge and if I were actually still doing the Around the World in 52 Books I might have counted this title for the United States.

I'm reading Look Homeward, Angel by Thomas Wolfe. I've heard he was a big influence on Roth. If so, I feel your pain. This thing is 500 pages, and I think if 300 of those were edited away, it'd be an amazing book

Hey, I found the link to your review from GoodReads :) Read Roth's "Goodbye Columbus and Other Stories." It has made me a lifelong fan even though I disliked "American Pastoral" as well (along with a few others).

Reading your blog describes my reaction to the book in an incredibly similar way. I just didn't understand how it could have won the Pulitzer Prize. The writing is beautiful but it is redundant and goes on and on. The book then just ends and left me frustrated.

FWIW, the book doesn't win the Pulitzer the writer does. But your review is very similar to mine and I've linked to it at the end of my review. I hated it.

You might be interested in heading over to Arukiyomi's blog and picking up a copy of the new version of Arukiyomi's 1001 books spreadsheet .

Along with calculating how many books you need to read a year before you die, there's all the 2008 edition books, all those removed from the 2006 edition, links to wikipedia , amazon.com and .co.uk and Google books.