My friend Heather took this photo a couple of weekends ago. We went for a walk in the woods. It was a bit cold at first, neither my boy nor I had anticipated the dip in temperature when we left our Toronto house to drive an hour north of the city. He's funny. He didn't want to go, but as he's only now just turned ten, I can still force him to spend time with me among the trees. Up until that point, I hadn't been outside in a week, and have been suffering from deep bouts of anxiety. About the virus. About the seasons changing (and the fact that I'd not even be able to spend much time outside). About working from home. About my job. About my husband, his heath is wonky, we're trying to get it figured out. Above all, I have a deep-seated, trouble-ridden brain that has a hard time getting outside of itself. The answer, sometimes, is simply to go outside.

This time ten years ago, I was in the hospital. I had been there since the middle of September when my disease (Wegener's Granulomatosis; or GPA) had flared because of my pregnancy, and my life was at risk. My lungs had started to hemorrhage, and the disease was attacking my kidneys, my creatinine levels climbing and climbing. Essentially, the baby in my womb had sent my system into overdrive, the same effect of pregnancy that in normal women gets them through to the end had the opposite effect--it was killing me. I've written about it here. And as time rolls on, the scary moments of those few weeks reverberate back, ten years is a long time, but in my mind, I'm right back there in the hospital when the doctor (with at least five others standing with her) said they were needing to save my life and I burst into tears.

And with one little blip, this is the longest I've gone without a major episode of the disease. I had a really small flare where I had to take some prednisone, but outside of having my son, I've been very healthy disease-wise. But I'm not healthy overall. It's been a struggle these last few years. Life-work isn't in balance, and I'm very tired, all the time, which is deeply ironic because I don't often sleep. In fact, this week alone I've had maybe one good night. At least Cathy Marie Buchanan's new novel is keeping me company (it's very good so far).

Reflecting on an entire decade in one blog post isn't an easy thing to do. For one, we're older, my husband and I. Not that I feel older on the inside. I'm still the same stupidly insecure, loud mouthed, perfectly bonkers human I was a decade ago. Perhaps, I hope that I'm wiser, that I have also learned to listen better, that I know who I am a bit better, even if I still hate myself.

Surviving another decade inside marriage feels like an accomplishment, too. We've weathered a rough few years, with parents passing away, falling into dementia, and other issues related to being the in-between generation, elderly parents on one hand, school-aged kids on the other. That's what serves us for having our son so late in life. There's pandemic pressure on all of us. I'm glad the school's are managing to stay open. We couldn't have survived another year of homeschooling. We aren't cut out for it--our entire family would be divorced if that was the case. Our boy thrives in his school environment, he's got wonderful friends, and is wild to a degree, and now that his cousin is in the same class, he gets a taste of the sibling-like relationship they share on a much more intense level. This is all good.

I don't know how to go into the next decade. I don't feel like I'm on firm ground. I don't know how to rebalance the teeter-totter that is the new reality. Working from home is so hard. The other day, when I hadn't slept, and got up, prepared the kid for school, made his lunch, made a cup of tea, and then sat down to work, my brain simply said, "nope." I wanted to "call in sick" but there was no way, as I wasn't sick, but I am so deeply down that I'm not sure how to crawl back up.

Ten years. Another decade without my mom. Another decade where I've battled with my finances. Another decade where I don't feel like we've gotten any further ahead. And now I'm looking down the line at the last two decades of my working life and want to feel like I've made a difference in the world. My dad was a firefighter. He literally saved people's lives. My work is different. I love being a publisher, I love everything about the business, it gives me genuine pleasure to work with young writers, to see their books in the world, to herald their stories out over social media. It is good work. But at the end of the day, it is work. And I am tired. It could be that I just need a vacation. An honest-to-goodness break where I don't check my phone or play Emoji Blitz or check Instagram. Life is so amazingly ironic--I had to travel so much for work, and it was exhausting, but I also was exhilarated by spending a day in New York presenting at a sales conference or flying halfway around the world to try and sell rights to books to foreign publishers. I miss it. Zoom calls pale deeply in comparison. When I was gone, I would miss home desperately. Now that I'm home all the time, I want somewhere to go.

This post is rambling. It doesn't have a point except to say that I'm struggling these days, mentally. It's a new one for me. I'm quite used to dealing with depression, anxiety, stress, but only in context of the disease, where there was a cause I could literally point to. These days, it's not the meds making my brain wonky, I think it's something else entirely. Malaise? Exhaustion? A bit of residual stress from that moment ten years ago where happiness and joy was crushed up against the very real possibility of death. I'm sure it's all of the above. And I know there are self-care steps to take, breaths to manage, yoga to do, walks to take, birthdays to celebrate, but, in this very moment, even leaving the quiet dark-is room where I work feels like an impossibility. So, we shall see. We have another hike planned for this weekend. I hope the weather holds. I hope I can hold onto the outside as we dive into another winter that's defined by the virus. I hope we stay safe. I hope, I hope, I hope.

On the Changing of the Leaves 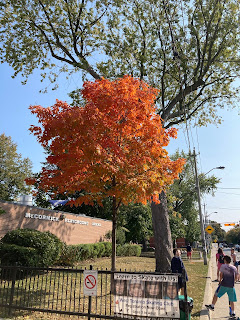 The weather has changed. It's colder. I feel the light pass my window feeling unable to go outside, to actually take a step forward. I'm stuck, wishing I had the power to change colour to something bold like this tree, but knowing that the only changes happening right now are me falling deeper into the ennui of quarantine. The hazy, foggy year I spent being sick after having our son coming into stark focus as we're about to celebrate his tenth birthday. Ten. An entire decade. All those months that I've been carrying around the baby weight, carrying around the shadows of that traumatic time, all those minutes that have passed where I should have been able to get up and get around, to do something, all those seconds I passed staring at my phone.

Yet. All those moments where we cracked up. The trips we've taken. The story that I wrote that I'm really proud of, the work I do every day. The busy business of raising him, of the dishes and the meals and the snacks and the trips to the rink, there and back again. It stalls, but it speeds along, too, time. Context, as always, is everything.

Maybe it's the fall because it such a season of transition. A time when we should be excited about change, preparing for the hibernation season, the deepening of thought as winter comes in, dark, brooding. We've been lucky so far this fall, the weather's been perfect, not too hot, not too cold, but the rising disease in Toronto means that we're likely headed to another shutdown, and I can't get myself into good habits. Yes, I sit at my desk. Yes, I'm getting work done, attending meetings, contributing, putting books on shelves and mentoring writers through their journeys. It's rewarding work. But I'm exhausted. Mentally. Physically. Spiritually.

I've tried an exercise tape a few times over the last few weeks. It was very hard. I've tried to stop working at points to take a walk, and yet. I've tried to turn off the TV and get to bed earlier, and then I'm knee-deep in Emily in Paris and it's 4AM and I don't even know what happened. I just can't be motivated to move. To change and I know I desperately need to but I just . . . can't.

There are a lot of tears these days. Sadness threatening to overcome a more usual emotions, and I can't remember another time in my life where I have felt depressed like this but without the context of the disease or the drugs. The black clouds, I remember an article I read many years ago in Saturday Night Magazine calling them, circling, and swirling, hazy, overcast, never moving through. It's like I can't take a deep breath and clear it all out. I can't roll over and shake off the bad dream. I can't step outside and stand in the sun.

Like everything, it'll pass. For now, I'll meditate on the idea of changing leaves, and try to make a list of a couple of things that I can accomplish in a day. Try to not let all of the people down in my life who need things from me when I can't seem to put one foot in front of the other. I'm deep in it right now, but like everything, something will shift, soon, I hope.