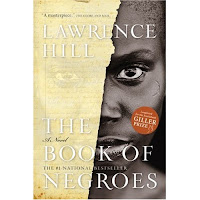 There are few books these days that can honestly be called epic. Many that aspire to be so, and many writers who set out to be "epic" without really understanding that it's not just page count that matters when a book stands up and marks its place in time. Lawrence Hill's The Book of Negroes is epic and it surely marks its place in time.

Over the past weekend when we were in NYC with my RRHB's parents, he was the Author of the Year at the Libris Awards. That says a lot, it's an award decided upon by booksellers and not a jury. Last year, Ami McKay won for her haunting, beautiful, and uplifting The Birth House. The books that win please readers and booksellers alike, a little bit commercial, a lot literary, and with a story that seems endless in its scope and telling, I'm not surprised at all that The Book of Negroes, and Lawrence Hill, won this year.

The novel finds Aminata Diallo, a young African girl aged about eleven, growing up as many generations before her have grown up. She has a mother, a father, a religion (she's Muslim), a village, and is in training to follow her mother into midwifery. But everything changes the moment she's captured by traders and sold into slavery. Transported by ship to the southern colonies before they've become the United States, she barely survives the journey. After she arrives, she's branded, sold, and taken under the wing of a woman who ensures she comes back to health. And the story simply doesn't stop there, she's sold to a Jewish man who treats her well, but keeps her enslaved.

More skilled than many, especially other women, Meena, as she's known, can write and read. Skills that serve her well and help her to survive the many injustices life tosses her way as easily as paper carries on the wind. The second half of Meena's life finds her freed, a member of the new loyalist colony in Nova Scotia. Still unhappy at the crown's treatment, a group of Nova Scotians travel back to the motherland and settle in Freetown, on the coast of Sierra Leone.

I read this book to satisfy my Nova Scotia requirement of the Canadian Book Challenge. I had planned on reading a Lynn Coady novel, but once this novel won the Commonwealth Prize, I figured I should probably read it sooner rather than later. And wow, what an achievement for Hill, it's a wonderful and important book. The sadness of Aminata's story is tempered by her own words, her strength and her amazing sense of herself in the world. Despite the hardship, despite her children being taken away from her at different stages in the book, despite being bought and sold and then bought again, despite the aches in her bones, she tells her stories again and again, all in aid of ending the terrifying and awful trade in humans.

Honestly, I enjoyed every moment of this book, even if it did take me three weeks to read. Now, I've got two provinces/territories to go before July 1st and only one slight problem. Anyone have an idea about reading Nunavut?
at June 20, 2008

A good pick for Nunavut is Zachariah Wells' poetry collection Unsettled which is based on his experiences working there.

I had a tough time with Nunavut, too. Actually I did not finish because of it!!

Kate, that's an excellent suggestion -- I've just ordered the book from Insomniac. Fingers crossed it gets here before July 1st.