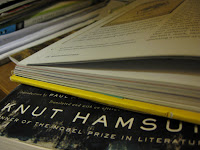 In my last post about the 1001 Books You Must Read Before You Die list, I was full of resentment over having slogged my way through American Pastoral. With Knut Hamsun's Hunger, I've now forgiven the list. As the unnamed protagonist wanders around Christiania (Oslo) starving and half-mad, he narrates the decline of both his physical and mental states. Hunger is a striking, captivating novel that feels utterly modern in its conception with echoes of the stream of conscious-type narratives that I am ever-so fond of reading.

Originally published in 1890, the struggles of the writer to simply live, to find a warm, dry place to sleep, to keep his body protected, to find food to satiate the most basic of the body's expectations, seem beyond him for many reasons. He has no money because he hasn't sold an article (he has sold many articles to the pawnbroker, though). He's been evicted because he can't pay the rent. His appearance deteriorates as the novel continues leaving bits and pieces of his hair all over the city (it's always falling out!). While respite comes throughout the book in various different places, the overall suffering and consistent starvation of the narrator, his awful living conditions, and the fact that at one point he resorts to sucking on wood chips ensures that he never really comes through the other side.

In a life where a few pennies (øres?) would make a world of difference, the writer clings to a sense of his own morality. He refuses to steal any food for survival. He pays back his debts (even if it means he'll starve once again). He believes entirely in the value of his written words if only he could get his mind to work. He simply never asks for help. Then, driven to the brink of madness, the writer finally sacrifices his freedom for survival, and it's a bittersweet moment.

Hamsun won the Nobel Prize for literature in 1920, and from what I can discern from the biography in the back of the book, his own struggles to make a living from his work inspired aspects of Hunger. The author's strength of character comes through (sitting atop a train after being diagnosed with tuberculosis and breathing in as much air as humanly possible) both in terms of the power within this novel but also in his personal story. Balancing out the basic needs of life with the kind of hard work the narrator resigns himself to just in order to survive, the entire book feels like a testament to the kind of men who value ideals of strength in character above all else. All in all, it's a magnificent book. One that I would have never discovered had I not embarked upon the whole 1001 Books Challenge in the first place.

READING CHALLENGES: Killing two challenges with one book: Norway for Around the World in 52 Books and another 1001 Books title.

PHOTO IN CONTEXT: My second-hand copy underneath my 1001 text, which has a far superior jacket image.
at November 01, 2008

I'm using the 1001 list, too. In between other books, I use the random number generator on it. So far, so good.

You make this sound so compelling. I am looking for a copy to read as well as getting the 1001 list. I think I have only read about 300 on the list so am looking forward to reading some great books. Thanks! Great review!!

Just dropped by to say Hi - found you through your excellent review of 'The Private Lives of Pippa Lee' (my choice for Tuesday's book club). Loved it too - I've been hard pushed to find criticism ... looking forward to the movie, don't know about you? I write a Writer's blog - come on over! All the best.

PS being bionic warrants not only a theme song but a cape and something fetching in spandex - at least, for your bravery. 2 family members have just undergone the same thing (their attitude not so rock'n'roll, but they are getting there).