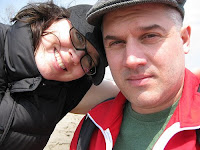 How do weeks go by and have I zero time to update this space? Not having a computer complicates things because it means that I can't sit down after dinner and write a quick post, and squeezing anything other than work into day to day life seems almost impossible. Here's where I am lately:

1. Saw the kidney doctor lat week and he said two things: one, I have excellent blood pressure and considering I have barely exercised in the last six months, that was a relief; two, because there's so much extra protein in my pee (gross, I know), I might have to take more medicine to stop it from mowing through my organs and causing even more damage.

2. One should never get organized for one's taxes in January. One will lose half of the things one is supposed to bring with her to the accountant and then forget the rest. What does this mean? Going through all the receipts again to see what's missing.

3. Our house is coming along swimmingly. My RRHB has built a deck off the back where a gross, disgusting, rotting mudroom used to be and I am spending every spare moment outside. Last Saturday I got up early (he was working out of the house) and spent every minute from about 8 AM until 1 PM in the garden and on the deck. Fresh air truly revitalizes.

4. Pigeon by Karen Solie is one of the best books of poetry I've read in ages. Her poems inspire a sense of wanderlust that I forced us to indulge in when we made a day trip to Point Pelee two weekends ago. Pictures are here. This would be book #26 for the year. I'm sorry the review is so short. But just know it's the perfect book to read in the spring and her observations about how the modern world interacts with nature made my heart skip a beat.

5. I've also finished reading Paulo Coelho's Veronika Decides to Die (#27). The tale of a young girl who tries to kill herself only to discover that life can be redeemed at any moment was...okay. Certainly not my favourite of all of Coelho's books that I've read, but I enjoyed thinking about how Buffy would play the lead in the film and how they'd adapt it for the big screen. The love story is sweet and he writes about mental illness with an alarming accuracy -- it's no One Flew Over the Cuckoo's Nest, but more of an exploration of how creative minds are sometimes forced into difficult situations when the normal limits of society cannot bind them. Maybe the idea of redemption was a little too obvious throughout the book for my tastes. But it's apparently Coelho's most autobiographical book, and the P.S. section at the back of my copy was fascinating to read in term of his own experiences with mental hospitals and the barbaric treatments he himself suffered. Also, this book is on the 1001 Books list, so I can add on to that challenge, which is good. I'm so far behind in my reading it's actually shocking.

6. I'm halfway through Francine Prose's amazing biography about Anne Frank. It's coming out next fall so more on that later. As well, I finished what might be my favourite novel I've read so far this year, Brooklyn by Colm Toibin, but I want to write a proper post about it, so, again, more to come on that title too.

7. The week before I saw the kidney doctor, I also saw my family doctor about a world of issues. Mainly the fact that I haven't felt like myself in months, the grumps have taken over, and maybe the prednisone crazies have stuck around in ways that they haven't in over 10 years. That's been part of my radio silence too -- who wants to read about my sadness over and over again? There are far better things to do. Right now I'm just figuring my way out. See #8. 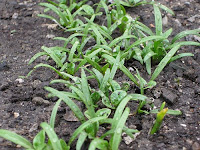 8. The garden. Wow, who would have ever thought that I would become a gardener. But there's something magical about planting seeds and watching them sprout. Last year I tackled vegetables and this year I planted some flowers (none of which have started to grow beyond seedlings yet). I like to plant things with a purpose so a lot of them are either edible or have beneficial properties for birds, bugs and butterflies. More pictures to come. But what I do know is that taking a half-hour, an hour, fifteen minutes and spending it outside after a long day has made all the difference.

9. All of the meds have combined to make me more tired than I ever thought possible. The more I push through the exhaustion, the better I seem to feel, but I'm also irritable, grumpy, short-tempered and so fuzzy-headed that I can barely put a to-do list together. Anyone have any suggestions?

10. I've been obsessively using Purell these days. Not just because of the Swine Flu hysteria but more because I've picked up every single little bug that's gone around. There were about six weekends in a row where I was either running a fever, barfing (that was a pleasant one), coughing, more coughing, wheezing and/or feeling stuffy-headed from various viruses.

11. Marley and Me is quite possibly the most boring film I've ever watched. Next to The Watchmen, where I fell asleep, in the theatre, right before the sex scene. Wow, that was a shocker to open up your eyes too. Also, Jennifer Aniston is orange. Throughout the entire picture.

Great update and a lovely picture!

Yay! It's you. The garden looks great and I'm glad you're finding goodness where you do. xo

Good to know on Brooklyn. I have that book here to read! I will move it closer to the top of the pile in importance!