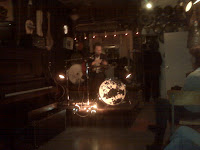 My RRHB's out and about this morning. He was up and gone before I even contemplated what being awake actually means. Still, hours later, I'm the same. Half-asleep, kind of dazed, and contemplating writing. Not the idea of writing. The actual fingers-to-the-keyboard-get-some-good-work-done-look-at-all-this-time-you-have writing. We have no food in the house, but there's a grocery store literally next door. Even that effort seems like too much when you had a shitty night's sleep and your brain remains muddled.

It's been a busy week. On Thursday night we went to see a rough cut of Small Town Murder Scenes, the film (somewhat) inspired by my RRHB's second record. Then yesterday we were at The Sixth to see Andrew Penner and The CFL Sessions (Henry Adam Svec). Work's been predictably crazy and all next week I'm in NYC for work/holiday (first half work; second half weekend getaway).

Funny, I was so taken in by Henry Adam Svec's CFL Sessions and his delightful storytelling -- which caught me off guard -- that I found myself uttering, "oh, how nice!" when he started talking about song collecting, archiving music, Lead Belly and the prison system, pure "Music," and this fictional character of Staunton R. Livingston that I was actually a little upset when my RRHB told me that it wasn't real. The laughter in the room turned ironic, which isn't a bad thing, just different from my original interpretation. The music was lovely, aching a little, a bit like Bob Wiseman, and when my RRHB and I were talking about that he said, "Wrench Tuttle wasn't real either and you love that record." And I said, "WHAT?" Shows you how much I know.

Andrew Penner came on around 10:30. The photo's above. He has an uncanny ability to create an entire song's worth of music by just his voice and a couple of instruments. It sounded like an entire band. I admire that -- it's kind of akin to someone writing much bigger than they are too. Long, luxurious sentences that invoke choruses of people standing behind the writer egging them on.

Yes, I'm tired. But I wrote this sentence sitting in the venue last night. I liked it then, I think it's kind of cheesy now: "He could learn to live without them, like eyes adjusting to the light, everything would eventually clarify."
at February 20, 2010

Not cheesy. At all.