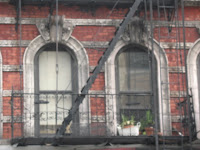 I was in New York City all last week, both for work and for pleasure. If you follow me on Twitter, you'll have been kept abreast of the many celebrities we saw in our travels. Odd, because of the nature of the weather (holy snow batman) but fun because I always like imagining what people are like in real life. We did not, however, see Ethan Hawke, which would have made me so dizzy with excitement I don't know if I'd ever recover. As my RRHB likes to tease me, if we ever did, he'd walk right up to the man and profess MY undying love. Heh.

We saw Catherine Zeta-Jones carrying a huge umbrella and smoking as she walked near the Natural History Museum on the Upper West Side. She's teeny-tiny. That Friday afternoon we spent over four hours wandering the halls and looking at all kinds of marvelous things. The only problem being my sh*tty North Face boots that leaked and which have even started to fall apart a mere months after buying them.

The next day we went for a nice walk in Central Park (I took a great photo of what it looked like with all the snow) and then headed to the Lower East Side to wander around. While we were at Katz's deli enjoying a fantastic sandwich, Jake Gyllenhaal was there with a photographic crew who were taking photos of him wearing some really snappy clothes. He laughed a lot, and was very kind to everyone in the restaurant. My RRHB said, "How come he didn't recognize me?" When he first noticed he was there. Funny. On the way out, one of Blair's cronies from Gossip Girl was hanging outside Katz's with her friends, her name is ridiculous, and so I am not going to type it. Judge me if you will. Then, coming back up Broadway we walked right by Chloe Sevigny.

Then, we shopped. A lot.

We had dinner with a friend in the East Village, and by Sunday AM we were both exhausted. Still, we rallied and wandered through a magnificent exhibit at the International Center of Photography on Sixth at 43rd -- it was right by our hotel anyway. More walking. We spent a good chunk of time at the Library looking at their free exhibits -- Candide and maps.

Again, more shopping. Then a little stopping for a pint so we could watch a bit of the hockey game before climbing in a car and heading to Newark for the flight home. While checking in our bags, I got a little flustered, and when we passed the next person in line, she smiled kindly at me. That person? Naomi Watts. She was on our flight to Toronto, and I'm not going to judge, but she was reading In Touch magazine. That made me smile. It must be hella odd to pick up one of those rags as airport reading and find pictures of your friends. Being a mainly Canadian flight, no one bothered her, but she did do a lot of the "I'm looking at my Blackberry because I don't want to seem like I'm standing here all alone" stance that so many of us are familiar with. I'm a pro at that stance.

And now a whole week has gone by. I've got goals this weekend, both for my novel and for my latest classic start, and am taking Monday off to complete them (along with going to the dentist, ugh). I'll just be very glad to be done both. My brain is too full of all kinds of stuff these days to settle down.

The photos from the trip are up on my Flickr. The shot of the socks made me laugh -- that someone tried to die out their soppers stuffed in the stones of the public library rang quite true for me. On the Friday of the big snow storm, I took off my socks in the museum and wandered around trying to dry them out and leaving a nasty, smelly-smell behind me for anyone daring to come near us. Ah, the human body.
at March 06, 2010

Holy celebrity sighting, Batman!!!! I have to say that I am incredibly jealous. Catherine Zeta-Jones? I love her! Naomi Watts? No way!!!!! I'm going to have to visit New York just to celebrity-watch :)

It is so nice to live vicariously through you! My NY celebrity sightings on my long ago trip consisted of my husband saying, "Look, there's Alfre Woodard" and me replying "What? Where?" Repeat for each person he saw. I am notoriously bad at noticing or recognizing people (even those I know).