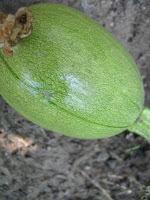 We stayed in the city because my RRHB played a festival in Collingwood on Friday night, which meant that after leaving for summer hours, I had a whole band widow afternoon stretched out in front of me. One guess where I ended up: the garden. I did some weeding, picked some beans for dinner and tried to save as many of the tomatoes as humanly possible. We also had two more cucumbers and there are 4 more zucchinis growing.

The cucumber is waning, dying a slow death on the vine, and I'm actually mourning its going. I've eaten those cucumbers all summer as snacks and it's a huge part of how I'm now winning the 18 Pound Challenge. When I saw the final slicer that I think will actually ripen out of the corner of my eye as I was attacking a weed patch near our lone corn plant that will probably not produce any corn, I actually gasped out loud. About a vegetable. So I brought it inside and tenderly sliced it up for dinner alongside the beans that are a mite bit happier now that I pulled the hulking squash out from in front of them (not to worry, our other squash plants are happily growing like mad just on the other side -- they're even starting to flower and bud).

Annnywaay, my Friday band widow afternoon/evening was spent watching some terribly girlie movies (Miss Pettigrew Lives for Day [utterly fetching and truly wonderful] and What Happens in Vegas [meh; of course, meh]) before passing out at about 10 PM and trying to read some of Marilynne Robinson's Home. Two pages, maybe three?

On Saturday I managed to do more gardening (more weeding; more watering) before meeting Tara for lunch before we went to go see Sisterhood of the Traveling Pants 2. Aw, those pants, still so enjoyable in a totally can't-believe-this-cheesy-movie-made-me-cry-more-than-once kind of way. There were some parts that were so ridiculous that we were laughing when we (obviously) shouldn't have been, but that's what those movies are for. The most hilarious part of the film wasn't even on screen. When Kyle MacLachlan showed up as the artsy drama teacher at Carmen's summer stock, a woman in the row behind us exclaimed, "Oh my god!" Heh. Among other annoyances: why on earth would anyone wear white eyelet to a charcoal drawing class? To any art class? The guy from Swingtown does a terrible Greek accent and is forced to say lines like, "we are terrible at not loving each other." Bridget goes to an archaeological dig and kisses the bones, all the while bouncing around and then PLAYING SOCCER next to the dig. As Tara said, "She's a worse archaeologist than Indiana Jones." But we forgive these indiscretions and even the truly awful pants because they did a really good, honest job of those moments that either change friendship forever or let it evolve as their lives evolve. Those were the parts that made me all teary.

Then it was back on my bike and home to see my RRHB for about 10 minutes before he left for his show at the Horseshoe last night. Meredith came down and met me for a drink beforehand, and then it was off for a night of rock as Fembots played with Cuff the Duke (and I'm so sorry but I don't remember the other opening band as I completely missed them!). A truly fun four beer evening complete with a joke, a very tall man bobbing his head, and a couple that made out on the dance floor while pretending to be in grade eight. They were awesome. 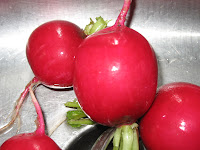 Despite my ridiculous hangover, I crawled out of bed at 7 AM this morning and couldn't get back to sleep. As a result, I finished a book, biked down to the farmer's market in Liberty Village, bought some great vegetables, biked home (HOLY CRAP IT WAS HOT AND HARD), and then cleaned out the fridge all before 10:30 AM. We've already come and gone from Kensington Market and now I have the whole afternoon in front of me to work on my Classic Starts and finish up my last Harlequin assignment for this month. That's if I don't collapse on my keyboard as the dregs of whatever energy I do have left piss out top like the rest of an empty keg (does that even make sense?).