Notes From A House Frau XX 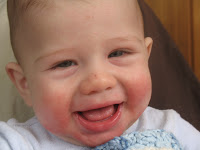 I Am Drowning in Empathy

At this very moment, my RRHB is serenading the RRBB with very sweet guitar sounds, singing softly to him, and I am finding it a struggle not to bawl. I am not going to lie. Things are hard right now. It's been a long six months of fighting the disease with very little good news. As a result of my blood work being so wonky, I'm back on a higher dose of prednisone and it's actually taking its toll this time around. I am defeated and down. I am hoping every moment of every day that it isn't reflected in my parenting. That the baby can't take one look at his puffy, grey-haired mother and think: "Why did I end up with her?"

He's six months old now, and we officially have to start weaning him. I need to start taking not one but probably two different medications for the disease, and neither are compatible with nursing. I am so hesitant to let it go, not because I think it's so good for him, or because we've created an accidental parenting nightmare with him only nursing to sleep for the most part but, rather, because it's truly the one thing that's gone so very right amongst all of the wrong the last few months. He's a champion nurser -- has gained a great deal of weight, and is rarely waking up more than once a night now that we've got a semi-decent bedtime routine going. I'm clinging to breastfeeding in the sense that it's a symbol of normalcy in terms of my life at the moment. I feel like a regular everyday mom, and not one whose exhaustion comes from a battle going on within her own body rather than the comforting tiredness of raising an infant.

I can't seem to hold back the blues any longer. I've tried. I'm doing it all right: I'm getting out, getting exercise, seeing friends, have a great support system, but when my creatinine hit 180 and I knew the disease was back to its nasty, aggressive self, I felt palpable fear. A panic in the middle of my chest. An ache in my belly. A tell-tale sign that if you don't fight psychologically as well as physically, the disease can beat you on all accounts. But thinking positively has never been a strong suit of mine. It's funny -- I like to think of myself as relatively upbeat person. Glass half-full. Glass half-fun. Lots of jokes. Laughing a lot. Enjoying life however it comes to me, but then, pour the prednisone into my system and I become entrenched in the cocoon of depressive thinking, everything's going wrong, I suck at it all, I look terrible, I feel even worse, and it's a vicious cycle that seems as hard to get off as a British roundabout.

And I cry. And cry. And cry. Not in front of the baby. And not about anything in general. I just feel so bad about so many different things -- silly TV movies, an episode of Law and Order, a book, a newspaper article, the state of the environment, the election -- the list goes on. I'm drowning in empathy. Goodness, my mother, who lived for over twenty years in a chronic care hospital, had a horrible existence. And I can't stop thinking about her lately, feeling such epic pain on her behalf, and I know it's not rational, she has thankfully passed away now, that it kept me up for hours the other night. Like Leonard Cohen sings, "I ache in places now where I used to play." I know he means it slightly differently than I would interpret, more bodily, but my mind is aching in ways I haven't had to deal with in decades. And I can keep it together. I am keeping it together. But I'm missing out on my own life in a way too. That's what disease does to you -- robs you of your potential. I've always thought that I've put up a really good fight of taking that potential back, of climbing out in ways that I can feel proud of: advanced degrees, writing, a career that I enjoy, a family, but for right now I'd settle for progress in a medical sense. For better test results, for my body to respond to the treatment, for someone to find a magical solution that rips the Wegener's from my body once and for all.

Funnily, the baby and I are struggling together. He's trying so desperately to move. He rolls and rolls and rolls and rolls but can't get any further, and then he fusses because it's frustrating not to be able to go where you want to go. I roll him back and pat his belly, tickle him a little, sing a little song, and he grins -- it's so delicious it could be a vegan cupcake -- and then we start the whole ritual over again. But I know while he can be the "measure of my dreams" (so say the Pogues), he can't be the solution to what's going on in my brain. He doesn't need that kind of pressure -- I have to pull myself up from the malaise myself. Burdening your children with your happiness -- what could be worse, I think, in terms of screwing them up for life.

Yet, there's so much joy in the everyday. We took the picture above yesterday when all three of us sat outside on our back porch and just watched the rainstorm. Pounding down all around us, we three happy and dry, the rain was another new experience for him, and for us too, in a way, looking at it from his point of view, wanting him to know weather, life, the outdoors, our backyard, all the potential of his life. Maybe that's the point, to remind myself that I still have potential, that the disease can't take it all, I don't have to let it win. But today, it's winning. Today, I'm crying a little bit too much. I don't want to leave the house. I want to eat Doritos, nachos and all kinds of other bad food. Thankfully, the Nephews are coming over for an hour and that should distract all of us from the maudlin feeling-sorry-for-myself kind of day I'm having.
at April 28, 2011

Email ThisBlogThis!Share to TwitterShare to FacebookShare to Pinterest
Labels: notes from a house frau

keep those nephews visiting. their undoubtedly great medicine. if you have to stop nursing, the so be it. you,ve done great. there is no guarentee for any woman that she,ll be able to nurse as long as she wants.