#39 - The Elegance of the Hedgehog 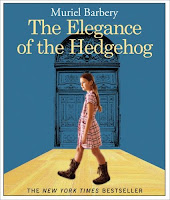 Two very good friends recommended this book to me, and they were both so very correct to do so considering how much I enjoyed it. The Elegance of the Hedgehog is a compelling, intelligent and utterly charming book. From the setting, an elegant apartment building in the centre of Paris where exceptionally well off people live, Barbery sculpts the story from two distinct points of view. Renee, the building's concierge, spends her days hiding her intelligence from those who live above her -- both literally and metaphorically. Paloma, an incredibly precocious and bright 12-year-old, lives on the fifth floor and also hides -- from her parents, from her schoolmates, from just about anyone simply because she likes to be quiet and think.

Both are convinced that there are deep metaphysical and philosophical reasons to hide. Renee hides because she's convinced the boundaries of society -- she being a lowly concierge -- defines her in a particular time, place, essence. Paloma hides because she's convinced that life isn't necessarily worth continuing -- she's decided to commit suicide the moment of her 13th birthday, it's the only logical thing someone of her intelligence can do, you see. Both create personas they show to the world and keep their true selves hidden away. Until one day when a new tenant renovates an apartment in the building, a mysterious Mr. Ozu, discovers the truth about both of them, connecting them in a way that only kindred spirits (those of the Anne of Green Gables kind) can be connected.

The novel skips back and forth between the worlds of Paloma (from upstairs) and Renee (from downstairs) and at once you get the view of the classicism Barbary seems to be exploring. There's deep philosophical undercurrents running through the novel. Renee attempts to teach herself phenomenology (which, if I remember anything from my second year class in existentialism is simply incomprehensible), she explores Japanese films, reads the Russians and generally soaks up impressive amounts of knowledge. Yet, even though she's just a lowly concierge, her intelligence can't be hidden forever -- and it takes an outsider, someone who truly "sees" her, to break open her own psychological barriers about her background and the expectations she has from her life. Renee believes she's a peasant -- and that shall forever set her aside from those she serves.

Paloma, born into wealth and privilege, easily sees through the trappings of her societal sect. She's vicious when it comes to cutting through the nonsense, mocks her mother's seemingly useless therapy, feels her sister's academic pursuits are more for show than anything, and is constantly questioning the world around her to find meaning. In a way, she's represents an epistomological side to within the novel -- always wondering about knowledge, driving her own theories about what meaning truly is, and defining herself consistently by what she knows or how she knows it.

Renee, if we are speaking in dichotomies, despite her Cartesian inferences, is the flipside -- more ontological, she's consistently questioning her very existence, talking in terms of not being "seen" and/or "noticed" by the people she interacts with every day. Metaphorically, it goes back to the age-old "if a tree falls in the forest..." kind of thinking. The more Renee hides, the more she proves her theory that her true self isn't worthy of existence, and when she is "found out" to be the brilliant, interesting, fascinating, self-taught lovely woman she is -- the revelation isn't lost on those around her. And love, which she believed to be forever banished from her life, becomes a very real and distinct possibility.

The novel is just full of delicious, quotable prose, but because I had a library book, I didn't want to ear mark the pages and was never around a pen and pencil to jot things down. Just know that there were moments of absolute bliss when I was reading this book -- a clarity of character and perception that I found so refreshing -- and the ending, oh, the ending, it's very sad, but oh so fitting, and I am ever so glad that I read this book.

WHAT'S NEXT: I'm reading the latest Wallander novel by Mankell. Hoping to get it finished and then on to my other library books before I take everything back this week. And get back to my shelves for the next little while.
at May 02, 2011