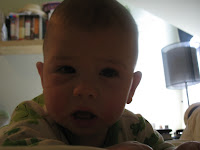 The RRBB had his six month shots today, and he's a little crabby, doesn't feel like eating and his nap schedule's all mixed up. So, I'm letting him play on his activity mat for a while as I sit here on a pilates ball and try to string some words together. Ups and downs, that's what the last few days are all about, ups and downs. Far more downs in terms of the disease than ups but what can you do -- every day is different. People think I'm joking when the answer to "how are you" these days is always, "well, I'm not dead!" We were at the doctor's this morning and it's semi-official -- they are probably going to put me on Cyclophosphamide for the Wegener's, and I have to wean the baby entirely sooner rather than later.

1. Who knew that weaning lead to depression? Like I need something other than the prednisone and postpartum messing with my brain. It's an unholy trinity -- but maybe bits of one will cancel the other one out. My family doctor's kids are 16 months old (she had twins) and today in the office she told me she still doesn't feel back to normal, and she's not even coping with a massive, stinking disease.

2. It's a beautiful day today and the last thing I want to do is go outside. Thankfully, the PVR is full of Oprah, Friday Night Lights and other sundries for when the RRBB is sleeping. I could read but I am even too exhausted and weepy for that today. I watched the Shania Twain episode while the baby slept a few hours ago -- I don't think I'd ever read her book -- but I'm fascinated by the fact that she wanted to lay it all out there, as pathetic and ridiculous as her actions were around the breakdown of her marriage, she simply wrote it all out and published it. Even the terrifically awful letter she wrote begging her ex-husband's mistress to leave them alone -- she published it. Oversharing? Perhaps.

3. As if I needed a reason to feel worse about always wearing pajamas. I read this beautiful post about motherhood on Kerry's blog, and then clicked over to the article she references about these terrifically hip and hot moms who never wear sweatpants, like, ever. Seriously? It's a good day if I actually change the sweatpants from the ones that I sleep in to a relatively cleaner pair to walk to the grocery store (and by "sweatpants" I am including their ugly stepchild, the legging, which I swore I would never, ever wear as pants. One should never swear anything about fashion). I would look better if I attempted to wear makeup, dyed my hair and put away the sweatpants but, hell, where would that energy come from?

4. The blues won today. Damn them.

5. CBC Radio played some really beautiful music from the National Parks Project on Sunday. Man, it made me want to take a road trip to every single one. Anything to get out of the city. Anything to get out of my house really. I'd love to take a giant trip this summer with the baby, somewhere foreign and by foreign, I mean Paris, but it's not practical given our financial situation (read: we are flat-ass broke). I miss travelling. And we'll have to learn how to do it a whole other way -- with RRBB. First up this summer: new passports. It's the last piece of ID with my maiden name on it. I will be a whole other person once that's done.

7. The novel I'm reading for book club reminds me of Before Sunset. Still, I can't get passed page 15 and started reading Roddy Doyle's new collection of short stories instead. I'm already halfway through; it's terrific. God, I love his short sentences.

8. I can't believe I am this upset about having to wean the baby.

9. The disease is winning. And not in the #winning sense that crazy-ass Charlie Sheen's barking all around Twitter about. Today, the family doctor actually said, "We need to save your kidneys now." And I got totally freaked out and almost started bawling in her office, and it wasn't even an appointment for me -- it was supposed to be all about baby. For the very first time in my life, I don't know if the Wegener's will win. I'm scared. I am honestly terrified.

10. Feel like the worst friend in the world. I haven't talked to or seen so many people that I adore, and one of my New Year's Revolutions was to be a better friend. I'm just not hitting that goal at all and it's making me feel awful.

Okay, enough self-indulgent, feeling-sorry-for-myself claptrap. I am now going to go and eat some dinner. Perhaps I'm just hangry (hungry + angry = one irrational girl [as coined by Charidy]).
at May 09, 2011

Email ThisBlogThis!Share to TwitterShare to FacebookShare to Pinterest
Labels: ragdoll rambles, the sickness

I don't know it if helps at all, but you've got a stranger thinking good thoughts for you.

You also might enjoy "Are You Dave Gorman?" by Dave Gorman and Danny Wallace, if you haven't read it. It's an entertaining and silly book about two friends and a drunken bet which gets out of hand. And it was also the only thing I could concentrate on when I was in the hospital getting my appendix out. It won't make you sad, and should make you laugh.

It popped into my head, and I thought it couldn't hurt to mention.

1) Leggings are way better than sweatpants. All the posh Mummies in Windsor were wearing them. Windsor UK, I mean...
2) I know I can't change your mind, but Baby got the breastmilk when he benefitted from it the very most. You are amazing for having given him that gift. Now that he's so big, real food is going to be most important now, and that's fine. And blah blah blah what he needs more than anything now is a strong and healthy mom (but it's true!).
3) You will win. It must be tiring to keep having to do so, but you will. And you have so much to win for. xo

Perhaps you need a dose of this -- http://risetothegoodfight.blogspot.com/