Notes From A House Frau XXI 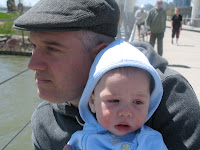 Nostalgia: Pictures For My Kid

Last night, my RRHB and I went to see The Lowest of the Low play Massey Hall. For a long time, he and that band's lead singer have been good friends. It's a pretty amazing thing to see someone you've known for twenty years (they were celebrating the 20th anniversary of Shakespeare My Butt) up on stage at one of Toronto's most prestigious venues. It's also really cool to see Massey Hall packed with people who have adored that record as a life anthem for as long as its been pressed jumping up and down in their seats, singing along, knowing all the words, and clamoring after the band post-show for autographs etc. It was a delightful evening.

But, as with everything these days, the whole evening just got me thinking about where the heck twenty years disappeared to. The disease had just been diagnosed, and I was out for one of the first times since getting out of the hospital. The same side effects (puffy face, hair loss, pimples, weight gain) on a much younger, non-postpartum body seem almost glorious in retrospect. I was wearing a cute, flowered dress, this I remember. We were upstairs at Sneaky Dees and my RRHB's first band, Dig Circus, opened up for The Lowest of the Low. The RRHB sang me the dirty bits of "Rosy and Grey." I danced a lot. We weren't together but it seems almost prophetic to think back now as to how we were probably always destined to be together anyway. He's still the very best person I know. He was back then. Brought me a hilarious Pepsi hat when I was in the hospital and hugged me like I was no different. He still holds me like that today. I treasure that, it's something to cling to during all of this, and how hard it's been for so long.

Annnywaay, I got stinking drunk. And managed to get stinking drunk for many, many Low shows in the coming years. There was one point when we (my dearest Hannah) saw them play in Kingston, and then drove all the way to Banff where we were working for the summer, only to see them there as well. Knowing the band, because so many of my friends from high school were in Dig Circus, was a highlight of my young life -- it felt so cool to go to the club and talk to the band. I had grown up with obsessive love for so many bands, a lot of it I outgrew (goodness, I listened to so much U2 in high school and then never again), but it also set the tone for so much of my life. I love live music, prefer it in dingy clubs before the bands are big enough to hit Massey Hall where you can get right up close to the front of the stage and go deaf listening to the up and down and back and forth of it all. And I've seen so many life-changing rock shows with my RRHB and they always make me nostalgic. Not like the nostalgia of last night, of a misspent youth, of the hundreds of hours I've spent drinking beer and jumping up and down, of thinking about all of the things that have passed since the very first time I'd seen the Low until now, but of how rich my life is because music, good music, has always been in it.

Before the show, the RRBB and I danced around the kitchen to "Come on Eileen", a favourite song that just happened to be on the radio. A few weeks ago we went to see The Pixies (also at Massey Hall; they played another anthem album, Doolittle), and a couple weeks before that we went to see the Elephant 6 Collective (although another throw-back to the 90s, I had only started listening to these bands in the last couple years). I'm lucky to know some of the musicians whose words and sounds have made such an impact on my life. I feel words deeply. They are more than letters strung together. They are always pregnant with meaning and precious with pause -- they keep me whole and make me who I am. Without them, without being constantly amazed by how other people use them, I would be lost. Without my own words, I would have drifted off into the abyss of the disease, of the general overwhelming tragedy of my life, years and years ago. And then to know the incredible human beings behind the words, the melody, the tunes that are as familiar to me as the smell of the city after a delicious rainfall, well, I'm lucky.

In a way, I want our RRBB to know his parents outside of this role we have fallen into simply because of his creation. When we first announced his impending arrival, thus dubbed "fig" for the duration of his incubation, our families and friends were really excited for us. The baby became the centre of our universe. It's all anyone talked about, and now that he's here, he's the star of the show, and rightfully so. He's a gregarious, delicious little creature who brings the joy like nothing I've ever had in my life. But we were people before him. In fact, I think we were pretty interesting people. And for him to appreciate how rich he has made our lives, he needs to know how rich our lives were before he was a fig in my belly. Our lives aren't captured on film, so he'll rely on photos and stories and seeing the people we've known for more than 20 years at birthdays and occasions and dinners and we'll become the "parents" -- it's generational, and it's not something that can be changed. I don't want to be his friend. I am his mother. This is a role I take very seriously, but I do want him to know us as friends in relation to the people we know, to the goodness we've put out into the world, to the weight we attach to words in both of our lives. We can play him the songs. Perhaps he'll fall in love with them too. Perhaps he won't. Maybe he'll hate music and want only to play hockey. Maybe he'll really not like books (argh!) and love video games. Who knows. For now, I'm satisfied to let him in a little bit at time -- to dance around the kitchen yelling "Torra loora rye aye" and hoping he feels the joy I feel when I hear that song.

It's Mother's Day. We are not celebratory people, in a sense, no, that doesn't describe it. Celebrating life on specific, somewhat made up holidays (Valentine's Day, etc) has never really been my/our thing. I mean, I know I've told this story before, but neither of us can ever remember our wedding day -- RRHB because he wasn't convinced about getting married in the first place and me because I was always convinced I just wanted to be married and couldn't give a whip about a wedding. People look at me strange when I say I honestly have no idea when my anniversary is, but I'm more interested in being with my RRHB on a daily basis, on celebrating my marriage in my own way, than I am about making a big deal about anniversaries, holidays, etc. We love our families. We love our family. We love each other. We love him. I've survived another day with the disease and, in ways, I think nostalgia truly takes up enough space in my life in so many good ways that I don't need to save it all up for one day. When my RRHB kept asking me what I wanted to do for Mother's Day, I didn't have an answer. And then, I'm glad I didn't. Because today was perfect and perfectly us. We got up, had pancakes, took the baby for a wonderful walk by the lake, and spent an afternoon talking nostalgia about the last twenty years. And, for the first time in a long, long time, my eyes are wet and dripping with tears that feel like little blessings and not the unbearable weight of the disease.
at May 08, 2011

Email ThisBlogThis!Share to TwitterShare to FacebookShare to Pinterest
Labels: notes from a house frau, ragdoll rambles