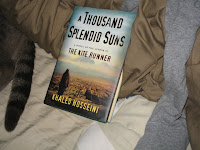 Khaled Hosseini's new novel, A Thousand Splendid Suns, takes its name from a poem by a 17th century Persian poet Saeb-e-Tabrizi, and focuses on the life stories of two Afghan women, Mariam and Laila. The lives of both women, despite their very different beginnings, are fraught with tragedy, oppression, dignity and finally redemption throughout the almost 400 pages of this book.

Mariam, the illegitimate daughter of a wealthy man from Herat, lives in a poor kolba, a roughshod mud hut outside of town with her mother. The product of an affair between her mother, a housekeeper, and her father, who comes to visit once a week, Mariam grows up with the stigma of being a harami. Her father is ashamed of her and her mother, to an extent, resents her presence, despite the keening kind of love she feel for her daughter. After the death of her mother, Mariam is sent by her father's many wives to Kabul, where she's forced to marry the brutish, and much older, Rasheed. Their union is not a happy one. For one thing, Mariam is a teenager, and her new 'husband' is not only much older, but much more strict. He expects Mariam to be a proper wife, wear a birka, and be obedient.

Years pass, and the marriage between Rasheed and Mariam deteriorates, but by this time, Hosseini has introduced the novel's other main character: Laila. A beautiful, blonde-haired, light-eyed girl, Laila's family dotes on her, and she's raised by a dutiful father who feels that everything in life stems from having an education. Laila, of course, excels at the top of her class. And then, as the Soviet regime ends, and the country collapses once again, bombs fall around Laila's life, pulling away her dearest friend Tariq, and destroying as much of her world as she could touch by spreading her arms out beside her.

The lives of these two women, who live as neighbours in Kabul, are set against these types of incidents, as the war-torn history of Afghanistan plays out in an extremely personal way. Rasheed takes centre-stage again, now husband to Mariam and Laila, and the two women slowly learn to navigate their lives around his brutish, slavenly behaviour.

A Thousand Splendid Suns isn't as strong a novel as The Kite Runner and a number of parts feel forced. But like in The Kite Runner, there are serious elements in this book that build nicely from beginning to end. As the Afghanistan stop in my Around the World in 52 Countries, it's a worthy novel just for giving me an inside look at life in a war-torn country. But without the central essence say found in the main characters of a book like Camilla Gibb's exquisite Sweetness in the Belly, the first two-thirds of A Thousand Splendid Suns lacks in emotional depth or understanding, especially in the context of the women's lives.

In a sense, to sweep the broad swath of history from 1964 until the years just after 9/11, Hosseini gives up some of Laila and Mariam's own stories, and fits them into the major events that changed the country's landscape. I'm not suggesting that's a bad thing nor is this a bad book, not by any means, and the ending is particularly wonderful and has magical, even redemptive qualities, but it all feels kind of Hollywood. It feels like the book set out to prove to the rest of the world how awful life was for those women, and while it achieves that goal, I think it would have been even more effective had it not lacked a certain something when it came to their characterization. To an extent, I feel like Hosseini himself sacrificed these women in order to get his own point across, despite his obvious respect and admiration for both Mariam and Laila. But even despite my criticism, I really did enjoy reading this novel. And boy am I happy to at least be able to cross off one more country; it's a just such a treat to keep my challenge alive.

PHOTO IN CONTEXT: I read the last 100 or so pages of the book this morning in bed while my RRHB slept after his show in Brantford last night. You can see the tail of the cat who kindly took up my position after I left. He's keeping the home fires burning. And he's a good excuse not to make the bed, just yet.
at June 24, 2007

I am planning to read this in the next couple of weeks. I am very much looking forward to doing so!

Okay, I loved The Kite Runner so I'm going to give this one a go. (But it just seems so sad...)

Good review. A critical eye without being snarky. Excellent, excellent stuff.
You didn't get caught up in cycle of forgiving the author just because he'd had success with the first.

I always have trouble reading any type of book. No matter how hard I resist I inevitably fall asleep within the first 10 minutes of reading. SO, I am very grateful for movie producers. I watched "The Kite Runner" and enjoyed its deep message. A co-worker of mine has a copy of "A Thousand Splendid Suns" on his desk and I will attempt to read it - but if a movie comes out I'm all over that!
Thanks for the review. Oh, I would like to find the full text of the original poem that the title of this book was taken from. Has anyone found it?
Thanks for the review!
and the cute pic ;)

Ah! How beautiful is Kabul encircled by her arid mountains
And Rose, of the trails of thorns she envies
Her gusts of powdered soil, slightly sting my eyes
But I love her, for knowing and loving are born of this same dust

My song exhalts her dazzling tulips
And at the beauty of her trees, I blush
How sparkling the water flows from Pul-I Bastaan!
May Allah protect such beauty from the evil eye of man!

Khizr chose the path to Kabul in order to reach Paradise
For her mountains brought him close to the delights of heaven
From the fort with sprawling walls, A Dragon of protection
Each stone is there more precious than the treasure of Shayagan

Every street of Kabul is enthralling to the eye
Through the bazaars, caravans of Egypt pass
One could not count the moons that shimmer on her roofs
And the thousand splendid suns that hide behind her walls

Her laughter of mornings has the gaiety of flowers
Her nights of darkness, the reflections of lustrous hair
Her melodious nightingales, with passion sing their songs
Ardent tunes, as leaves enflamed, cascading from their throats

And I, I sing in the gardens of Jahanara, of Sharbara
And even the trumpets of heaven envy their green pastures