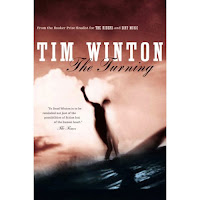 How have I made it this far in my life and not read all of Tim Winton's books? Seriously? I don't think there was a single story in The Turning that wasn't ridiculously successful, and his writing is so full of angst and ambiance that it's impossible not to get a sense of both character and place, often within the first few sentences. I'd have to say my favourite stories were "Family," "Boner McPharlin's Moll," and the title story, "The Turning."

While not all the stories are linked, some have characters that appear in more than one, and many take Angelus, a small town on the coast in Western Australia, as the main setting. One of the neat technical aspects to the collection that I enjoyed was how Winton ordered the stories. We'd read about one character as an adult, and then the next story would be him as a child, exploring how something in childhood led him to the man he was, but in reverse. I also felt like it takes a deft, dedicated hand to describe adolescence so well, and this is a quality The Turning shares with Winton's excellent new novel coming out in a few months, Breath.

I read Winton for Australia in my Around the World in 52 Books challenge. And I have not note that I've had such a visceral reaction to both of his books that's kind of akin to how I felt after finishing Peter Carey's ridiculously good Theft. Winton's writing is so urgent, so driving, so gut wrenching that I think it's impossible not to relate to it on that kind of level. And while I wouldn't go so far as to say that I would crawl up into bed with any of these characters, I could certainly understand why Jackie gets in the car with Boner McPharlin, and how it turns out exactly the opposite of what she wants and needs, scarring her for life.

One line from "Commission" sent a rock-and-roll-style reverb right through me: "Drunks and junkies take everything out of you, all your patience, all your time and will. You soften and and obscure and compensate and endure until they've eaten you alive and afterwards, when you think you're finally free of it for good, it's hard not to be angry at the prospect of dealing with the squalor again."

PHOTO IN CONTEXT: I'm at work this morning so a book cover will have to do. Love the colours and the image of the surfer.

READING CHALLENGES: As I said, it's all about Australia, and the novel does encapsulate a world that I've never been to, which makes it rich for the imagination.