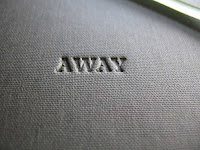 The first book in my For the Ladies Canadian Book Challenge of 2008-2009 is Jane Urquhart's Away. The first few moments of this book truly captivated me. I started reading it and didn't want to stop, not for work, not for my favourite TV shows, not for my RRHB, anything. The multi-generational tale of Irish-Canadian settlers powers along like a captivating storm on a summer day. An important story needs to be told, from grandmother to granddaughter (which we find out cryptically that this is new knowledge; for a lot of life the granddaughter believes herself to be a grand-niece) about the history of the family.

The book's title refers to the matriarch, Mary, who becomes Moira one morning after she discovers a young man washed up on the shores of a small island off the coast of Northern Ireland. The experience of him, of his perfect shape and lovely form just before he dies, carries Mary "away." The man whispers, "Moira" to her just as his last breath leaves him, and she falls in love with him, in love with his voice of the sea, in love with this other person she becomes, in love with the water from which he comes. The rest of the first half of the novel concerns itself with the ways Mary comes back from being away. She marries and then has a child they call Liam. And then the famine hits. Her husband, Brian, a schoolteacher and farmer, agrees to let their landlords, two English quasi-fops, send them to Canada.

The pair has another child, a girl named Eileen, and she and Liam become the focus of the story once they're in Canada. The landscape has changed but the epic nature of the novel hasn't and the journey for Eileen and Liam to their new farm near Lake Ontario. There's so much mixed up in the novel that sometimes I think it gets a little lost in its own epic-ness. Characters get swept up in politics and then conflicts are completely forgotten, entire generations are skipped, whole backstories are simply lost, and main characters go off on long journeys and are never heard from again -- but somehow, the novel holds your interest.

On the whole, I enjoyed this book terribly, as my mother would say, warts and all. The mystical nature of being 'away' -- of being at once lost and found to your inner self, is an interesting theme around which to circle a novel. The dichotomy between the old world and the new, of Irish and English, of men and women, of right and wrong, all shift in Urquhart's book. In a way, that's what makes Away such a perfect product of Canadian literature. If I were well back in my M.A. and still studying post-colonial writing, I would probably write one hell of a paper about this book. But I'm not, I'm doing my Canadian Book Challenge and it's a pretty darn perfect title to include in said challenge.

PHOTO IN CONTEXT: I have a beautiful, collector's edition of the novel that McClelland & Stewart released for their 100th anniversary. While I'm not crazy about the dust jacket design, I do love the cloth treatment with its tender title stamp and pretty grey colour. (Blogger's giving me trouble uploading the photo, so I'll have to try again later -- the link above is to Flickr).

WHAT'S UP NEXT: A review of Kerry Cohen's Loose Girl, and Runaway by Alice Munro.

THE SOUNDTRACK: Currently playing, "You Don't Understand Me" by The Raconteurs. Oddly fitting, I think. The recording of the song allows you to hear the cool, almost-squeaking like sound of fingers going up and down the neck of the guitar (I think?) to hit the different chords (I think?) which kind of reminds me of all the beautiful flaws in the book itself.
at July 14, 2008