#67 - The Septembers of Shiraz 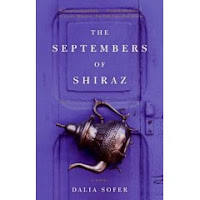 I always feel like Phil Keoghan when I start a post off with, "The Iran stop in my reading trip around the world..." But hell, it's the truth, I picked The Septembers of Shiraz because I didn't have an Iranian author on the list and the book got a whoppingly good NY Times review by Claire Messud. But in retrospect, I am certainly glad that any measure of influence got me to read Sofer's work, whether it was word of mouth because of the review, the Facebook peeps that read the title through our group, or the fact that I got a copy of the novel from work, because The Septembers of Shiraz truly broke my heart in a good way.

For a first novelist, Sofer has a voice that's assured, strong, and tender at the same time as she tells the story of Isaac Amin, a Jewish jeweler living in Tehran just after the revolution that brought the Ayatollah Ruhollah Khomeini to power and overthrew (is that the right way of looking at it?) the monarchy. Not a monarchist, but suspected of being a spy, Isaac is arrested just before lunch on September 20, 1981. He spends the better part of the next year in jail being interrogated, beaten, and locked up in solitary. The life of an imprisoned man turns Isaac inside himself as he relives his life, his marriage to Farnaz, and tries to convince the Revolutionary Guard that he has never spied in his life.

As Isaac suffers inside the prison, his family tries to go on living without him. Farnaz tries to track him down, attempts to fight off being taken herself, and comes to terms with why her marriage might have turned stiff, if not sour, in the months before her husbands arrest. Their son Parviz, away in New York studying architecture, broke and unable to pay his rent, must come to terms with the ideas and ideals of his faith while living in the heard of Hasidic Jewish neighbourhood in Brooklyn. Young Shirin, Isaac's nine-year-old daughter, also copes with the disappearance of her father in her own way, by becoming involved in her own anti-revolutionary cause.

Sofer has a tendency to use metaphoric language to really let the reader into the experience of Isaac in prison. While it might be a bit on the flowery side sometimes, there's an underlying ache to her prose that remains convincing throughout. As always, Around the World in 52 Countries has opened my eyes to a different world, and made me thankful that I can experience it through the comforts of my warm, dry, half-built house.

PHOTO IN CONTEXT: No photo that I took this time around, but just an image of the book cover...

HOWEVER: I've got three extra copies of the book sitting here in my office and I want to share. Email me via the blog here if you want one. And then I can't wait to read your thoughts.
at October 16, 2007

The books sound very intriguing. I think this is what I am looking for for my upcoming book club meeting. Thank you for the review.

I'm v. excited to read it-- the Iranian revolution is such a fascinating story, and if Claire Messud liked it than I must give it a try. Thank you!

The book sounds fabulous. Is it too late to get one of your copies?

Not at all, I've got two still left to give away. Email me!

Um, I think I'm having a really dense moment.

Is it hidden? Help!