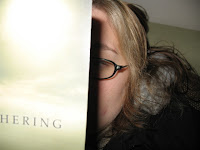 After hearing Anne Enright read last weekend at the festival, I raced home afterwards and started The Gathering right away (well, after I'd finished with Hemingway, of course). In part because I loved her reading of the work, powerfully spoken with a voice fraught with emotion and a hint of exhaustion, but also because the novel just won the Booker. (I get caught up in awards, I'm not ashamed to say. It's a good way to discover new writers, right?). Not surprisingly, the book reads in much the same way: it too is powerful, full of emotion, and teeters on the emotional edge that Veronica, the novel's 39-year-old protagonist, finds herself.

Charged with telling her aging mother, worn out after raising twelve children and enduring another seven miscarriages, that her brother's body has been found in Brighton, Veronica struggles to cope with his death. As if the absence now of him from her life entirely puts her entire existence into a sharper focus, and until she gets it all down, until she tells the story of what happened when she was eight or nine in the living room of her grandmother's house, Veronica simply can't move on. As if the past has finally come up and choked her future, and without blowing it all out around her, she'll never breath the same way again.

The narrative that spills out over the next few hundreds pages fights with itself at every turn, angry, raw, overwhelmed, Veronica takes hold of what's left of her life and shakes it, pulls all the pieces down around her and then can't really tell how to put them back together again. In the end, I'm not clear if she has or not, but it doesn't really matter because this book is so painfully honest about life, about family, about tragedy, that becoming 'normal' again isn't much the point.

Just before she started her reading, Enright mentioned that now The Gathering had taken the prize, she felt far more tender toward it, considering so many more people were going to read it now with the shiny gold sticker on its cover. And I can see why she might need to make the distinction. Veronica isn't a character that you feel an affinity for, she's a character that pulls you into loving her with sharp fingernails and a bitter edge to her voice. She's at once complex and plain, difficult and bright, and smart and ridiculous all at the same time. But she's also got to get to the end of this, not her life, but just these feelings hauling her out to the metaphorical sea of her family's existence.

It's a book about memory, about the lies we tell ourselves every day, about what family means and what it doesn't, and about how people don't change, 'they are merely revealed.'