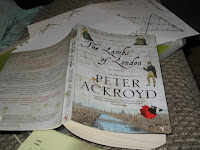 For the first time since starting all the various challenges, I actually kind of disappointed in one of my books of choice. In the manner of swapping out already-decided books for ones that are a) more accessible and b) perhaps shorter and c) actually grabbing my interest at the moment, I've changed Cloud Atlas, which I absolutely will read one of these days, for Peter Ackroyd's The Lambs of London. It's also a fitting historical novel to read for the Around the World in 52 Books challenge, as it's based on real people (Charles and Mary Lamb, authors of Tales from Shakespeare) and set in London during the late 1700s-early 1800s, which means it'll at least give me an accurate flavour for the time and place.

But I can't help but feel slighted by the novel. Yes, it's an interesting piece of historical fiction; yes, it cannot be denied that Peter Ackroyd knows his stuff; and yes, I found the characters and their situations relatively interesting. In short, Charles and Mary Lamb, themselves troubled in different ways (Charles by drinking; Mary suffers from a bipolar disorder) meet an equally troubled (even if it's not apparent at first) William Ireland. Insistent upon proving his mettle to his bookseller father, William finally gets the attention and acclaim he feels he deserves when he uncovers a number of Shakespearean documents.

Unfortunately for me, I found the story somewhat uninspiring, and a lot of the historical details felt forced and often jumped out like a grandstanding football fan forced out of the stands. On the whole, the plot was fairly predictable despite how interesting I found both the characters and the setting. In truth, I don't quite understand why the book was included on the 1001 Books list despite, as RG (the writer who submitted the book to the anthology) insists the author "playing to his strongest suits." And the themes of literary and personal "fraudulence" ring quite hollow in terms of novels in this genre, if I'm being completely honest.

PHOTO IN CONTEXT: The book on the patterned furniture in my Stratford hotel room.