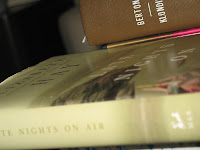 Elizabeth Hay's lovely, Giller-winning novel took me quite some time to read. Set in Yellowknife in 1975, the novel follows a group of CBC radio people as they make their way through an informative part of their lives. Touched by the presence of two relative strangers, Dido from The Netherlands and Gwen from small-town Ontario (if I'm remembering correctly), the station's manager, Harry, finds his life categorically changed from the moment he meets both women. Their presence in his life and at his station act as a kind of impetuous for change for many of the other people these two come into contact with, and in his own way, Harry falls for both, with differing results.

As the novel drifts in and out of the lives of the various characters, you can tell that Hay feels out each and every one with an intensity that can do nothing except inform the story. As the life in the station exists both on and off the air, it becomes apparent that each person in her narrative has come north and stayed for different reasons. There's something so subtle about Hay's writing, and about this story in general, that builds up over the time spent engrossed in the book.

And when the four main characters, Gwen, Harry, Ralph and Eleanor, set off into The Barrens for a trip of a lifetime, you know that they'll come back changed. It's a novel about that moment in life that you only realize later has come to define your entire life. While all the characters are too close for this to become clear, the narrator gives little hints throughout the text (meant to serve maybe as suspense; in my opinion not entirely necessary), and on the whole it works well structurally.

While I haven't read many of the other shortlisted titles (just two Effigy and Divisdero), I do think that Hay's novel has the scope, the emotion, and the heartbreak to be a novel deserving of the prize. I adored Garbo Laughs, and I felt this novel taught me many things, not only about life north of sixty, but also about the idea of radio, the importance of it in the lives of these characters, how sometimes a career isn't necessarily built but its found, and that love can move in many forms within a person's heart.

It's interesting that two of the more intriguing books in Canadian fiction this year have been set in the North, Kevin Patterson's brilliant Consumption, and now Late Nights on Air. Maybe it'll get more people thinking about how different the landscape will be in the next fifty years if we don't make an effort to preserve it. Every inch of Hay's novel is full of the scenery, not just to set the story, but to inhabit it, like we do our desk chairs every day, from the flora, the fauna, the wildlife, it's a world that demands attention, and not just on a fictional level.

PHOTO IN CONTEXT: I finished the book in bed this week, and so a picture of it on my bedside table taken from the perspective of my head laying on the pillow.
at November 28, 2007

I just finished this (my first non-assigned book in three months). I loved it. Will post something soon.