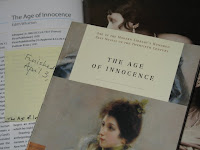 Edith Wharton's classic might have just moved onto my "best books I've ever read in my life" list. I've been quoting from the novel for days. The Age of Innocence won the Pulitzer in 1921, and it's easy to see how and why the book is included in the 1001 Books list.

Newland Archer, our hero, devotee of upper class New York society in the age following the Civil War, finds himself torn between the life he imagined, the proper life, the expected life, and his passion, which comes in the form of his fiance May's cousin, the mysterious Countess Olenska. Already standing outside society, the Countess has left her brute of a European husband and returned to the bosom of her family. Archer, a lawyer and all-round saviour of a man, becomes enlisted in the cause to resurrect her standing, and falls in love with her along the way.

Wharton's tone is pitch perfect, and her narrative shows no signs of age, but it's still as if the book is frozen in time, the descriptions are vivid, the characters redolent of the period, and the story heartbreaking. It's great storytelling told by a master of the form.

Two more quotes, and then I'll spoil no more of the book for you:

"...[F]or a moment they continued to hold each other's eyes, and he that saw her face, which had grown very pale, was flooded with a deep inner radiance. His heart beat with awe: he felt that he had never before beheld love visible."

"Something he knew he had missed: the flower of life. But he thought of it now as a thing so unattainable and improbable that to have repined would have been like despairing because one had not drawn the first prize in the lottery."

Ah, if only the goal of self-satisfaction was so still utterly admired as unachievable in our post-post modern thoughts.

PHOTO IN CONTEXT: The book on top of its 1001 Books entry on my desk.

READING CHALLENGES: The first of the two 1001 Books Challenge titles I'm supposed to read in April, which brings my score to 154. Yee-haw!

WHAT'S UP NEXT: Consolation by Michael Redhill and The Ravine by Paul Quarrington. And maybe I'll get back to War and Peace. But really? Who am I kidding? Anyone have recommendations for Summer reading?
at April 02, 2008

Everyone around the office is talking about The Gargoyle (Aug 5). I read the first 50 pages last night and was blown away.

dude! we can be on the pretend jury for the Impac prize and try to get through the 8 novels on this year's shortlist in the next 2 months.
http://www.impacdublinaward.ie/2008/shortlist.htm

I LOVE that idea. Last year's IMPAC winner was my favourite book I read from ALL the books I read last year.

ok , i just got back from Waterstones and the only title they had was the Patrick McCabe novel. So I'm going to start w that. They've crisis ordered the other 7 books and hope to have them asap. In the meantime I'm going to order De Niro's game from amazon and that will be no2.

fun times! I'll check in next week with a status report. :)

Totally fun. I just ordered three from the list, with two to come ASAP from Amazon.ca. One title isn't available on ANY Amazon (.com, .co.uk or .ca) so I'll have to check back in with that one. I think I'll start with Rawi Hage, because that's actually a Canadian book. How fun! I'll do up a whole post about our "challenge."