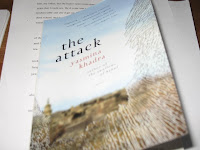 Yasmina Khadra's The Attack explodes even before it starts. The first few pages describe a woman's first-hand experience with a bomb in Tel Aviv. Her husband, the story's narrator, Amin, is a surgeon at the local hospital, and it's only after a long shift sorting through the casualties after the bomb that he finds out about his wife's death. For Amin, though, this is just the beginning of the tragedy. It soon comes to light that it was Amin's wife, Sihem, who wore the bomb that caused the blast. The revelation that his wife became a suicide bomber, a fanatic, someone so unlike the woman he thought he married, turns his life upside down.

Unconvinced that he's heard even an inch of the full story, Amin turns his back on the entire life he's built in Tel Aviv, pushed away by angry neighbours, by the pressures of a racially charged situation, he retraces his wife's last steps. And as many know, when loved ones keep secrets, it's never easy to learn the truth.

The Attack is a powerful novel, it cuts to the heart of the trouble in the Middle East and portrays a man unable to find himself, he turns his back on his own tribe only to find that it's just as impossible to fit into the society he's chosen. Despite the urgent nature of the narrative, the dialogue feels clunky to the point of didacticism. You get the feeling that Khadra's writing a very important book, but on the whole I felt the novel missed a slight emotional edge. That said, I was utterly engrossed in the story from the very first, most excellent, sentence: "I don't remember hearing an explosion."

Amin's journey is heartbreaking, difficult and, in some ways, unbearably pointless. It's easy to criticize the awkward storytelling, but absolutely impossible to take the author's motivation, if I can be so bold as to address it, to task. It's a raw, honest book that wants to open up a discussion about the very real issues driving the conflict. In that sense, it's terribly successful. And my criticism about the dialogue aside, there are some wonderful bits of prose in the book, and here's just one of the many passages I marked:

The bottom's no good for anybody. In this kind of implosion, if you don't react very quickly, you lose control of absolutely everything. You become a spectator of your own collapse, and you don't realize that the abyss is about to close over you forever.

PHOTO IN CONTEXT: Simply the book sitting on my desk, no biggie. I am excited about the fact that in a few weeks I'll be back to taking pictures of the books in context at the cottage. Goodness, I miss the cottage.

READING CHALLENGES: I had The Swallows of Kabul on my Around the World in 52 Books last year and only managed to get halfway through the first third of the novel. This year, I had it back again, but am replacing it with The Attack. Because Yasmina Khadra (the nom de plume for Mohammed Moulessehoul) was born in Algeria, I'll cross off that country, despite the fact that the novel takes place in the Middle East. It's also the first of eight books in the IMPAC Challenge. I didn't realize that The Swallows of Kabul was also nominated for the IMPAC, so it's nice to see this book on the shortlist as well.

WHAT'S UP NEXT: Until the packages from Amazon arrive with the rest of the books in the challenge, I'll probably dive into a classic or finish Emma Donoghue's latest, The Sealed Letter.
at April 19, 2008