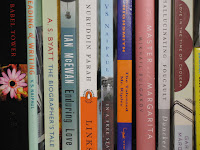 If I could choose only one word to describe Patricia Highsmith's The Talented Mr. Ripley, it would be: thrilling. If you haven't seen the movie, I'd highly recommend reading the book first; it's so much richer and far less stereotypical than the film. And now I'd even go so far as to say the movie spoiled the book for me in many ways.

When first introduced to Tom Ripley, he's pulling a half-hearted tax scam and not even bothering to cash the cheques. When fate brings him into contact with Mr. Greenleaf Sr., and presents him with the opportunity of a lifetime, there's an instant when the story could have gone either way. Highsmith could have set out to write a beat-inspired (which is certainly what the movie picked up on) buddy tale, an On the Road Does Europe, but for one fact: ambition. Tom sees the life he wants and sets about getting it, doing anything he possibly can to abandon his pathetic life back home and reinvent himself as a man worthy of his surroundings.

When the wealthy Greenleaf sends Tom over to Mongibello with all of his expenses paid to "rescue" his son Dickie from a life of total and utter leisure, Sr. believes them to be friends, which is his first, utterly tragic mistake. From the very moment that Tom abandons his pitiful existence in New York for Europe, one can embrace the following statement from a 1001 Books:

Tom Ripley is the one of the great creations of twentieth-century pulp writing, a schizophrenic figure at once charming, ambitious, unknowable, utterly devoid of morality, and prone to outbursts of extreme violence.

Tom just doesn't want to live with Dickie, he wants to be Dickie. And Tom's decision to become him is so cold and calculated that it sends a chill down well below your spine. While the crimes add up (what's another murder, really?) and the lies become truth in Tom's head, the book races along to its utterly satisfying, yet somewhat open-ended, finish.

In a "is this book worth 1000 words" aside, here are the reasons why I book is just so much better than the Hollywood version:

1. There are far less characters. In fact, ones that play a huge role in terms of amping up the dramatic action, namely "Meredith Logue" (as played by Cate Blanchett) and Peter Smith-Kingsley (Jack Davenport), aren't even in the book (the former) or play an incredibly insignificant role (the latter).

2. So much of the action takes place in Ripley's head. You really get to explore the motivation behind his actions. They hint at that in the film, but the action has to be driven by impulses that can be read by even the most dense in the audience. Hammer. Meet head. Head. Meet hammer. The book is just so subtle, and that's what's so seductive about it.

3. Marge is pudgy. I think there's a point when Ripley refers to her as a gourd. Unkind, to be sure, but certainly not the svelt, sexy Paltrow as portrayed in the film.

4. I do admit that the film did justice to the setting of the novel. Yet, there's so much more in the little details: how Tom's only going to heat his bedroom in his palazzo in Venice; how Dickie's house has no refrigerator at first in Mongibello; how Greece looks when Tom first lands toward the end of the book. The descriptions are crisp and clean, like scissor cuts, and absolutely contribute to the atmosphere of the book. They don't need to make the book believable; they just are.

5. The film turned Dickie into a jazz musician. Yes, it's utterly sexy, but it's way more real when you discover he's a totally (from Tom's point of view, of course) mediocre painter.

6. The end of the film always, always sat wrong with me. I felt that it was overkill (ahem, pun not intended) and unnecessary. I could understand Ripley's motivation in terms of his other crimes, but not at all in terms of this one. It felt fake and constructed. Imagine my surprise to find that the ending to the novel is nothing like the one from the movie. Imagine my delight to see the pitch perfect note that Highsmith ends upon. And then imagine how redeemed I feel in terms of having the criticism in the first place. See, I knew it just wasn't right...

And while I realize I can't go back in time and unwatch the movie to preserve my reading experience, it has taught me an incredibly valuable lesson: always, always read the book first.

PHOTO IN CONTEXT: The Vintage Crime / Black Lizard trade paperback on the shelf with many other 1001 / Around the World in 52 Books titles. This one's a keeper.

READING CHALLENGES: Another title from the 24 that I'm trying to read this year from the 1001 Books challenge. Although, I have to say, that the classics are really inspiring me these days. They're all I seem to want to read. And I've now hit the nice number of 150 books read from the list. Whee!

Interesting take on this in that I hardly ever read the book first! LOL! I still really really enjoyed Atonement, even though I saw the movie first, but I suppose that was because they were so faithful to the book in the first place.

Hmmm...did have a point in here somewhere.