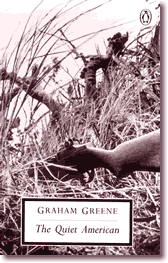 Finishing up Graham Greene's exquisite little The Quiet American brings me up to speed now in terms of my 1001 Books club, and this post is a milestone in the blogging world too, as I've hit 1000 posts. Instead of writing the same things in two different places, I'm just going to copy and paste what I posted up on the boards:

What did you think of the book?

I appreciated the short, succinct nature of The Quiet American. I enjoyed the book's politics, its own powerful, yet stilted, observations about the conflict from Fowler's point of view, and the overwhelming drive for Pyle not only to save the country from itself, but to marry Phuong, to "save" her in a sense.

Had you read this author before?

No, but I had seen the movie (although I didn't remember all of it).

Would you read something by him again?

What would you rank this book out of 10?

Do you think it deserves to be included on the list of 1001 and why?

I do think it deserves to be on the 1001 Books list. Why is a much harder question. I think unlike books on the list like The Lambs of London (which absolutely do not belong on the list) or every single title that Ian McEwan has written (I think they were desperate to fill the pages by then; and not that many don't deserve to be, but every one?), The Quiet American has a fascinating sense of morality underlying its narrative: the line between good and evil isn't clear, not in war, not in life, and certainly not between men.

As a kind of conversation between neo-colonialism (of the quiet kind) and overwrought, more classic colonialism of the French and British, the novel puts the characters of Pyle and Fowler in impossible situations, if only to prove the utter uselessness of either side. Pyle can no more get over his innocence in terms of his believe in the justifiable reasons behind his cause than Fowler can actually return to his old life in London. Both are changed and immutable at the same time, much like the old ideals each side clings to during the war.

The edition that I found (it's a British Vintage, I think) has an introduction by Zadie Smith, who points out that Fowler's description of the war is never far behind a major plot point. That even though he states over and over again that he is neutral, whether that actually turns out to be true or not, not becoming involved is impossible. Narrative and politics become merged into one, as if the setting can't help but stretch itself into every single aspect of the story, which remains the reason why the novel succeeds.

And this line: "She put the needle down and sat back on her heels, looking at me. There was no scene, no tears, just thought -- the long private thought of somebody who has to alter a whole course of life."

PHOTO IN CONTEXT: I didn't like the cover of the one I have here so I just searched out one I preferred.

READING CHALLENGES: I'm on track now for the 2 per month 1001 Books challenge, and finishing this book brings my complete score to 151. I am enjoying these classics so much that I've already started Sense and Sensibility. I might not read anything written in this century for a while. However, I do have work reading and Canadian challenge to get back to too.
at February 17, 2008

I loved Sense and Sensibility. I think you'll find Emma Thompson's film workaround of her sister's broken betrothal rather interesting. I like film The Quiet American very much so after reading this, I'm keen to read the book.

Congratulations on reaching a 1000 posts. You needed to make a bigger deal out of that. I'm looking forward to your next 1000.