Notes From A House Frau XXII 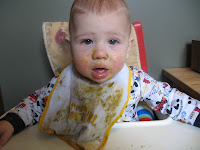 What A Difference A Few Weeks Make

This picture cracks me up. The RRBB definitely enjoys his food -- on this day he had green beans, some chicken and vegetables, and some barley cereal. There might have been dessert. I can't remember. All I know is that by the end of it he had food from one end of his face to the other, which to me is an important part of discovering what he likes and doesn't like, of discovering the joy of eating. The RRHB does it a little differently, he cleans up the baby as he goes along, consistently wiping his face so that he doesn't spread food from one end of himself to the other.

It's interesting, as the RRBB turned 7 months last weekend, I can completely see him start to develop more and more independence. I know, ironic, to talk about independence in terms of a wee baby who can't walk, talk or even feed himself. But, more and more, the RRBB likes to do things independent of me -- he's almost completely weaned, and while I still feed him, technically, the food isn't coming from inside of me any longer, and that takes some getting used to. He still yearns for it, and so we've kept one or two feedings until the doctors absolutely tell me I need to stop, yet he's trying and loving so much "real" food that I'm encouraged by all of his likes (and very few, read: none, dislikes). Also, he's sitting up on his own for the most part, falling over occasionally, bumping his head, bawling, and then breaking my heart. Yet, we are so very, very lucky, as I keep saying to all of my relatives, for he's truly a happy, healthy, gregarious, charming little boy. I adore him.

Independence is an interesting concept -- I am certain the RRBB doesn't understand it psychologically, or maybe he does and I am way off the marker but, instinctively, he's trying harder and harder to separate himself from us, his parents. He complains now if he lies down in the bath, before he would sit placidly, splashing a little, now the water ends up halfway out of the tub before we're even finished. He loves Not a Box, but not so much Goodnight, Moon. If he isn't eating fast enough, he complains; but then, if it's too fast, he gets equally upset. He makes a little strange when he wakes up from a nap. Yet, if you get him at the right time, he'll charm the pants off of you. This is the real gift of parenthood, not just the unmitigated, unceasing love that renders your heart incapable of understanding how this person was not a part of your life just months ago, but seeing first-hand the evolution of a personality. Objectively, it's not something one remembers, it's not as if you can reach back into your own mind and think, "wow, what was I like at 7 months?" Yet, every day that I spend with the baby, I am seeing how fascinating it is to watch him grow -- and my heart breaks just a little each time he grows more independent, but it also means I've got a bit more freedom. Evenings, nap time (few and far between these days; teething), stroller time, visits with grandparents and granties and gruncles, and it's all a wonder to me. I can't stop marveling at him. I can't but wonder what other surprises are around the corner.

He's the only baby I will ever have. Even typing that sentence makes me sad. I never imagined I would love the baby stage as much as I have. I mean, I have always loved babies, but in the sense that I'd hold them for a while and hand them back. Cute, snuggly little things that smelled delicious and whose exhausted parents I'd barely notice. Parenting wasn't a reality to me -- the utter loss of self wasn't a devastating reality, the sheer tenacity of his will to break us completely in those first few months has almost been utterly forgotten. Now, I can sit and read while he plays beside me, holding one hand to steady him, the other in a book. That, I can do. He goes to sleep so early that my mind can drift (when I'm not so exhausted I can barely see) to a place where I can spend some time working on non-blog writing. In short, I feel lighter than I have in months.

That's not to say that the disease has let me go just yet. I see the SFDD this week and we go from there. They are almost convinced they need to switch the drugs. All I know is that I need to get off the prednisone. There's a pain in my left hip. It's familiar. And tragic. And I can take a lot, a lot of punishment from the gods or the universe or whatever karmic relativity has decided that what my world means is Wegener's and all the ensuing tragedy, but if I lose my other hip, well, I am not sure I'll recover. I need to move. Without movement, without walking, biking, swimming, I will surely curl up into a ball and disappear.
at May 30, 2011

Email ThisBlogThis!Share to TwitterShare to FacebookShare to Pinterest
Labels: notes from a house frau, the sickness

What a fantastic picture!

I was a clean as you go feeder. YOu know, scrape it off their face with the spoon and back into the mouth it goes.

LOL, I do some of that, scraping and back into his mouth, but it is so much fun seeing him make a mess that I can't help myself but to let him make a glorious mess