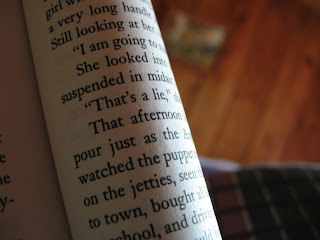 I find it perfectly fitting to be writing about Gabriel García Márquez's masterpiece, Love in the Time of Cholera, while I have a fever. As there's nothing new that I can possibly add to the world's discussion of this text other then to say that I came to it for many reasons: the first of which would have to be its inclusion on the 1001 Books list; the second, because I'd read One Hundred Years of Solitude after finishing my undergrad at Queen's and fell hard for it; and I read Ben McNally's Valentine's Day column over at Booklounge.ca where he said it was the ultimate book to read for that holiday. See, lots of good reasons to pick up this book.

Regardless, could there be a more expressive book about love ever written? Probably, but this book took my breath away more times then I could possibly count. Full of every single type of love story, from an unrequited affair that lasts the length of the book itself to the hills and valleys of a long, successful marriage, from the physical to the spiritual, from the epistolary to the serenade, it's impossible not to appreciate love in all its forms after finishing this novel. The sentences are exquisite, complex and meandering, almost to the point of getting lost down the cobblestones of the author's mind, until he brings you back to the apex, which lands in exactly the right place.

The Columbian port in of call for my Around the World in 52 Books, I can't think of another novel I could savour like this, as if it's a sweet cheese or a fine glass of wine. I was all rosy for love after finishing this book up north, and ended up watching Before Sunset for the fourth or fifth time. My own story ended up with a lot of long sentences as I thought about the main love affair that forms the center section. Of course, I ended up editing half of them down over the last few days I was there because they didn't make much sense, as I was all drunk on Columbia, the Caribbean, the food, the smell of almonds, and the like. Ahem.

In the end, the craziest analogy I can come up with that describes the reading experience of Love in the Time of Cholera is this: a few years back when I was still working at the evil empire, I was having a discussion with my coworker Lynne, where we were imagining what life would be like if we were cats. Go with me here. It's okay as it's not as kooky as it sounds. Beyond the pale ass licking jokes we got from the cheap seats, we were thinking of how cats don't really know time as we do, how their days are measured by their senses, by things that they smell, by places they visit. In a way, Márquez's novel is set out by the senses as well, but it's also defined by one emotion, in a way, it's all measured out by love. Love sets the pace and brings the action. Love defines the characters and their motivation. Just like a cat smelling its way through the day, this novel imagines an entire book not set about by the plain, banal chronology of the weeks, days, months, years in a life, but by love itself, as real as the grass, the trees, and yes, the ass, that my cat uses to define her day. In a way, it's the essence of everything. And aren't we just dumb enough never to realize it.

And there. I've jumped the shark now by mentioning my cat in my blog. Sigh.

PHOTO IN CONTEXT: Of course I finished this novel while in bed. If you look closely enough you can see the tip of my grandfather's paint-by-numbers on the wall.
at July 16, 2007