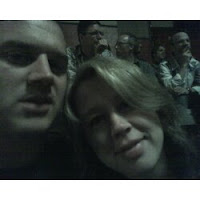 Massey Hall in Toronto was the last stop on Wilco's Eastern Seaboard tour (dunno if that was the 'name' of the tour considering how totally un-rock sexy it is). And it's been so long since I'd been to any kind of ticketed rock show (Prince, I think, was the last stadium show that I'd seen), that you kind of forget the whole experience. How far you are away from the band: I always prefer to be right up front so I can see what's going on. How big the show seems: lots of flashing lights and the smoke machine. How everyone sings along to the big songs and whoops when they hear the first chords of the ones they really like.

It was a great show, and I knew a lot of the songs just by osmosis because the records are in constant rotation around our house, but I was super-pleased when they played "A Shot in the Arm," and the lovely "Via Chicago" from Summerteeth, which is the one I listen to most of the time. And I liked how funny Jeff Tweedy was—when the audience started clapping spontaneously, he said, "You're in the wrong tempo!" And he encouraged the audience to clap during the second encore, when they were playing "Spiders (Kidsmoke)" from A Ghost is Born, while the band stayed silent, he said, "Keep it together Toronto!" (or something of the like). Because many of the audiences all sped up. Funny those things that musicians notice; things that my RRHB notices, that I would have no idea whether or not we were faster or slower than the beat. "Did we speed up?" I asked my RRHB afterwards, "a little," he said. 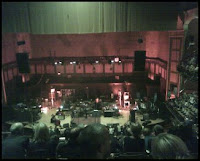 Funny, though, too, because I did a lot of thinking yesterday about the greatest rock shows I've ever seen, and most have them have been in small clubs: Tricky Woo at the El Mocambo, The Cons and Weakerthans from backstage at Lee's, the Hip from backstage at Copp's. Shows like that where I've been spoiled by a small crowd or by the RRW status, so it was a real treat to see a band from way up high, sort of observing the show as much as taking part in it. It's different, for sure, to feel so unconnected to what's going on well beneath you, but still hearing and seeing it all from a distance. But it was so much fun and the band was so good: big and intimate, cavalier and intense, brilliant and subdued, tight and fluid, all kinds of adjectives that prove I have no talent for writing about rock and roll.

I'd see them again in a heartbeat.

NOTE: the rest of the 'during the show' cell phones pictures are still on the RRHB's phone to be edited in later when he gets back from the cottage.
at July 01, 2007