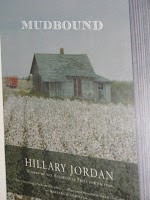 I set out wanting to love Hillary Jordan's novel, Mudbound, for one simple reason: the cover art is deliciously beautiful. The story of an almost-spinster, Laura, who marries late in life (at the ghastly age of 31), and soon finds herself on a mudbound farm in the Mississippi Delta caring for a cantankerous, racist father-in-law, a broken drunk of a beautiful brother-in-law, as well as her husband and two daughters.

Torn apart by two wars, Laura's husband, Henry, having endured the First World War, and his brother Jamie barely escaping the Second, the family tries to hold itself together in the face of adversity. It's always been Henry's dream to have land, and so when he buys a farm in the Delta and announces that's where they're all moving, Laura tries her best to remain positive and supportive. But when tragedy after tragedy forces them to live in the broken-down farmhouse with no indoor plumbing or running water, the true natures of everyone involved soon becomes apparent, which sets the story on its inevitable course.

Being a landowner means taking responsibility for the share croppers, and Henry, while fair, isn't one to rock the boat. Legions of racism, deeply embedded in the small-town South, cause all kinds of problems that are exacerbated by the return of Ronsel, a Sergeant in the Black Panther tank brigade, he's the eldest son of Henry's best farmer, Hap. When Ronsel and Jamie forge a clapped together friendship shook out over the lid of a bottle, the entire community turns against them, and it's this relationship that truly propels the conflict in the story.

Tragic, sad, moving, and inevitable, the novel captured my attention from its first page and I didn't put it down. It's one of those "read the whole book in one shot" kind of novels, and I highly recommend it.
at December 24, 2007

you think 31 is a late age for getting married? I didnt get married until I was 36. I guess that makes me ancient. I sure feel ancient. I'm now 43 years old and frequently get tired, trying to cope with a very strong willed 5 year old. LOL

Absolutely not! I guess the post didn't quite get my sarcasm -- the book inferred she was on the verge of becoming an old maid at 31, not me. :)