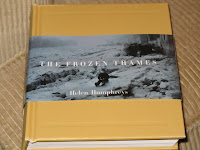 It's a brave new world. I am sitting on my couch this morning with my brand new (gifted by my incredibly generous brother) MacBook in front of me typing this blog entry. After a false start, and a shady Future Shop clerk who sold him a used model that was actually missing important pieces (like the plug that goes from the power adaptor to the wall) and had a burned out hard drive, we're back on track this morning with a beautiful new machine that hums and looks absolutely gorgeous.
Having not owned a Mac before, I'm stumbling around, but the more I get used to it, the more I like it, and not just because the commercials with Justin Long are just so cute. I'm excited to learn how to cut movies and all that fun stuff -- but for now I'll settle for figuring out how to get a photo into this post.
Okay, enough preamble.
Oh, wait, more preamble.
Today is my 2nd wedding anniversary and the anniversary of our 9th year living together. Congratulations to us!
Okay, now that's enough preamble.
Helen Humphreys's The Frozen Thames is an interesting novel. Written as 40 short vignettes describing each time the Thames has frozen over the last 1,000 or so years (the book starts with the 1142 freeze). Each story captures a moment in time around when the Thames froze from all different walks of life, publicans, noblemen, Kings, Queens, clergy -- the characters are as different as the ice itself.
While some of the stories tend toward repetition (there are a lot of frozen birds and a lot of Frost Fairs), each one has intimate historical details that bring that particular year to life. Whether it's Queen Matilda fighting off her cousin in the first tale, or the strange inscription the mason makes on the stone in another, it's impossible not to be taken in by the stories and transported to a time when warmth was little but a figment of one's imagination.
Of the stories, my favourites include the Postscript, 1709, 1716, 1565 and 1809. And I don't want to give anything away really because it's a sweet little book to read. In the Author's Note, Humphreys explains that she wanted to write about ice at a time when our world might soon be without it entirely. To document the wonders of the cold so that there would be a record. A cool appreciation for a season so many of us simply try and avoid -- by staying inside, by wrapping up in sleeping bag coats, by travelling down south -- instead of maybe enjoying it a little, like so many of her characters who walk along the frozen banks wondering at the sounds, wandering over the makeshift tundras, and always realizing the inspiration within.
PHOTO IN CONTEXT: How I wouldn't love to simply have taken the book outside, plopped it into the snowbank, and shot the picture, but that would ruin the package, and it's a truly delightful looking book. Instead, it's a fairly typical shot of the book on the chair in our TV room.
at December 28, 2007

Happy Anniversary and welcome to the world of the Mac - they're great!

Happy anniversary!
A Mac - how wonderful! I adore mine.

I'm going to have to pick up the Helen Humphreys. It sounds like the perfect reading for the next few gray and frozen weeks of January.