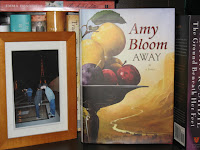 With Christmas decidedly out of the way, and the two of us absolutely crashing last night while we watched (and I bawled, natch) one of the greatest of the great movies, The Shawshank Redemption, we now come upon one of my favourite weeks of the year: Between Christmas and New Year (BCANY).

Goodness, a whole lot of nothing happens BCANY, last year we recovered from Cuba, the year before that we recovered from getting married (and watched all of the extended Lord of the Rings trilogy, awesome), and the year before that...well, you get the picture. We do a whole lot of recovering in the week BCANY. What generally happens is that I read a crapload of books, psyche myself up for the upcoming year, and generally bemoan the fact that I'm still sick (as defined by having to take stupid-ass medication) and going on my fourth year of dealing with this round of the disease.

So, as my year-end reading comes to a manic close, there might be a flurry of posts about different books I've finished. The first of which, Amy Bloom's Away, I have to say I enjoyed very much, and I hope that it starts a sort of trend. It's the story of Lillian Leyb, whose tale begins when her entire family is murdered in their home in a Russian pogrom and ends in the frozen tundras of the north. It's an epic book, one that takes Lillian, in her grief, to New York City, where she lives in the Lower East Side, and then, upon discovering that her daughter Sophie isn't dead after all, but rescued and spirited away to Siberia, on a journey all the way north. Lillian travels by train (in the closet), by boat (driven by her own hands) and sometimes by foot (blistered and bleeding), to northernmost Alaska, where she hopes to sail a boat across to Siberia and Sophie.

Bloom writes beautifully. The novel's research isn't obtrusive, but fits in the novel like sheets on a bed, lining Lillian's story with bits to keep her warm despite what she endures. The book isn't simply epic in scope, but also in story, along the way Lillian meets a cast of characters, and one would think it would be hard to keep them all straight, but Bloom's skill as a novelist never allows a single thread to drop untied. Instead, she's got a gift for ensuring that the reader knows the end to each main character. Tangential slips take off bit by bit as Lillian exits someone's life, and every question is answered -- even if it takes just a few paragraphs, Bloom makes sure you know what happens to the people that have touched Lillian's life.

All in all, it was a delightful book to read, and I loved the Canadian content, the Telegraph Trail, Dawson City's depleted "Paris of the North" status by the early 20th century, the bugs, and the idea of walking to the sound of your own voice, as Lillian does to keep going, telling Sophie stories with each step she takes. I won't ruin the ending, but I will say that I'd highly recommend this novel, regardless of the fact that my RRHB thinks the cover might just be the most hideous he's ever seen. I kind of like it, but am willing to hear arguments from either side.

PHOTO IN CONTEXT: Away standing up on my new bookshelves, already crammed with books, candles, sunglasses, ARCs, computer cords, pictures, receipts, CDRs, brochures and a whole host of other crap.
at December 26, 2007

Enjoy your spare time! And I'm enjoying your posting.

This week is also one of my absolutely favourite times of year. I'm getting a lot of reading finished up but am nowhere near as good as you about finishing up any postings about them!