#1 - I Married The Klondike 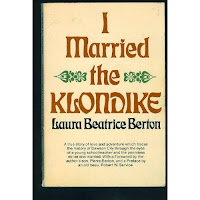 As of about 8 AM this morning, I was reading the following books: July's People, War and Peace, What Was Lost, Under the Volcano, The Outlander and I Married the Klondike. The first title in this list of the ridiculously scattered reading I finished was Laura Beatrice Berton's I Married the Klondike, a memoir written by Pierre Berton's mother about her time in the North. Not unlike Out of Africa in tone, but with a softer, sweeter core, Berton's story rolls along with a merry voice that shows the author not only clearly enjoyed her life, but also the setting in which she lived vigorously for many years.

As a schoolteacher living at home in Toronto, Miss Thompson (the author's maiden name) left at twenty-nine to teach kindergarten in the Yukon. During her years in Dawson City, she fell in love, raised a family, and stayed until her husband ultimately lost his job during the Depression. Leaving behind "the Outside" world for a hard, but happy, life full of old prospectors, prostitutes, upper class society mavens, politics and adventure, it's a completely charming story of a different kind of life lived.

If I have one small criticism, it's that the book reads perhaps a bit too much like a small town newspaper account of the author's time in the Klondike. There are few interpersonal details, which I guess isn't really the point she's trying to make, but rather record a history that was definitely only known to the few hearty pioneers who settled Dawson City. And I would imagine that the distance I felt in the narrative might too be evidence of Berton's own upbringing -- written long before the A Million Little Pieces style of memoirs, it's no doubt she didn't simply refuse to talk about the more personal aspects of her story, but having them within the narrative may not have ever even crossed her mind.

I know, however, that books aren't read in a vacuum, and I'd have to say that the same kind of quasi-racism that troubled me in Dinsen's book, kept nagging at me here too, when Berton wrote things about the "half-breeds" and "going wild like the Indians", the book made me kind of uncomfortable. It's interesting then to note that, in all honesty, I was pleasantly surprised to enjoy the book as much as I did.

The history of the Klondike is a subject I find fascinating. Ever since I wrote a series of articles about it for History Television, it's been something I float back to on occasion, and it was interesting to read the history from a woman's point of view -- to get the perspective of one not intending to strike it rich, but of an adventurous woman who sets out to take a challenging post for one year and ends up spending her entire life. As Berton notes, "I imagine that in everyone's life there eventually comes a moment when a simple question, or a chance meeting, or a knock on the door, changes the entire course of one's future."

Lastly, wouldn't it be fun to take part in the Berton House Writer's Retreat?

PHOTO IN CONTEXT: I read a copy of the book that had a library binding and so decided not to take a picture. Instead, I found the original jacket image from M&S (which wasn't hard, ahem, Amazon!), but if you're looking to read the book now, Harbour Publishing has the book back in print.

READING CHALLENGE: I'm going to try and balance out my Canadian reading and participate in The Canadian Book Challenge this year (In case you're wondering, I've picked #1 The White Stripes Way). I'm counting this book as my Yukon entry, even before I decide what I'm going to read for the remaining rest of the provinces and territories!
at January 06, 2008

You're right, it would be amazing to experience the Berton House Writer's Retreat! I've always thought that sounded particularly tempting.

Hi there, I missed this entry before. Glad to have you join the Canadian Book Challenge!