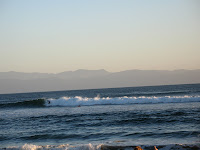 Perhaps the title is misleading -- because, while we had a great time, it wasn't necessarily an adventure in the purest definition of the word simply because we stayed at a lovely resort called the Palladium Vallarta about an hour outside of Puerto Vallarta. I mean when all your meals are taken care of, they hand you clean towels each day, and there's comfortable beach side seating, there's not a lot to do except relax, which is exactly what we did.

So in the spirit of last year's write up of our trip to Cuba, here's the good, the bad and the strange and the worst.

The good: Wow was the resort ever nice, with its lush scenery (a botanical garden) and access to a fairly private beach with crazy huge waves perfect for surfing, wave jumping and other water activities (like snorkeling, which the RRHB did a fair bit of). The food was also quite good, and I ate so much fruit and veg that I felt like a squirrel shoring up for winter. The weather could not have been more perfect, hot as heck during the day, cool during the evenings, and generally spectacular and sunny. Also, our friends, Stephen and Amanda, were there too, which meant the boys could entertain themselves while us girls stayed back reading if we felt like it.

The bad: The resort, as lovely as it was, ended up being quite far from town, which meant that it was an expensive cab ride ($40 USD), and the exchange rate we were getting was terrible. It just meant that you were trapped there unless you paid an exorbinent amount of money or took a bus for hours to get into the city centre.

The strange: There was a zoo at the resort. The animals included: two ostriches, two monkeys, some lemurs, some peacocks, deer (in heat) and other birds I can't name off the top of my head. And a botanical garden. Oh, and two crocodiles and some boa constrictors, which they promptly fed teeny WHITE BUNNIES to the horror of the kids standing there crying: "They're not, sniff, sniff, going to f-f-fed those bunnies to the --" 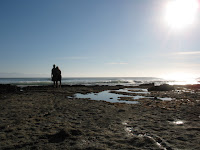 The amazing: I saw a whale spurt water from the beach. They spawn in Bay where the resort was situated, which was kind of cool. Not as fun as our friend Steve who surfs as he reported his nature sightings at breakfast, many of which included seeing the whales breech. I was jealous, I'll admit, but not enough to get me on a surfboard at 7:30 AM that far out with giant waves barreling down on me.

The activities: Lots of swimming, sunning, and reading on the beach. One day, my RRHB and I went horseback riding through the Sierra Madre mountains to a lovely waterfall, and then we all 4 went into Puerto Vallarta for a day toward the end of the trip to do some shopping and some sight-seeing. All in all, pretty amazing and relaxing. Who knew it could be that good?

The absolutely worst: So, the RRHB and I took a cab with a woman who was actually sitting near me on the beach the last day we were there to the airport. Not all that bad, right? Except I had actually moved AWAY from her because she was coughing like a maniac and the last thing I wanted from my vacation was to get sick. And then, as if my luck couldn't get any worse, it did, as the cab driver was also deathly ill, barely hanging on, and sucking back cough drops at an alarming rate, each one having little to no affect upon containing the rattle emaniating from his brittle lungs. Oh. And then Burlington Mom says: "But it's so very hot, couldn't we turn on the air conditioning!" Thus trapping all of the germs IN THE CAR and nailing the last iron in my coffin. In less than twelve hours I had a blistering cold sore and a wicked cough that has since developed into sinusitis and quarantined me at home until Monday. But I have freckles and a tan!
at January 31, 2008