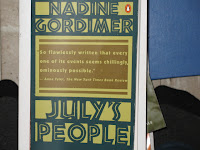 Nadine Gordimer's July's People is a bloody good book. A book I wasn't necessarily expecting to be as riveting as I certainly found it, and by far one of the best titles I've read from the 1001 Books list. In fact, I was so obsessed with finishing that I stood on Lansdowne Ave and read the last two pages before walking home. Some guy walked by, chuckled, and said, "Must be a really good book."

The story takes place in South Africa in 1980 during an uprising, which is fictional, where the country is invaded by Mozambique. With mayhem all around, Maureen, her husband Bam, and their three children are forced to flee the city. Their servant, whom they call July, offers to take them to his village, where they settle in his mother-in-law's hut for the time being.

Stripped of their city life, their status, and with nothing but the colour of their skin and a few prized possessions (a "bakkie" [truck] and a rifle) to remind them of what life was once like and despite their fiercely liberal beliefs, Bam and Maureen struggle to get along in this foreign world. Fighting fleas, sickness in their children, language difficulties, and a whole host of other problems, it's a challenge just to get through a day.

After weeks pass, the family starts to adjust, and the little motions that happen in families start again. The children make friends, and even Maureen finds herself more comfortable around the other women, gathering greens for dinner with them, speaking in broken Afrikaans to them, and managing the hut with a strong hand. But as a whole the family cannot flourish in the environment, and as a result, the relationship between July and the Smales breaks down.

Once affable, even amiable, small things pick away at the core differences between them: how July refuses to give back the car keys after taking a trip to town; how Maureen lords the information of his city mistress over him; and how he adjusts to life back in the village full time, how his own presence effects his family unused to seeing him home. Themes of racial inequality are impossible to ignore, as they're turned on their heads, then ripped apart, and forced into situations that exploit how the idea of the liberalism so cherished by Maureen and her husband in a philosophical way is almost farcical.

In one of my undergraduate classes in post-colonial literature, I read Gordimer's Burger's Daughter, which I remember to be just as poignant and readable as July's People. It was the same year that I read my first novel by J.M. Coetzee, Waiting for the Barbarians, but for some reason, I carried on reading him and abandoned Gordimer altogether. Maybe now is the time for me to read more Gordimer? Especially considering how much I enjoyed this novel.

PHOTO IN CONTEXT: Because I didn't have my camera with me on Lansdowne as I read the last two pages, I've piled the book up on a stack of ARCs that I have to take back to work. Oh, and there are some stocking feet poking their way in as well as the library book I need to return. Ah, the life of a literary gal.

READING CHALLENGES: July's People is on two of my lists: the 1001 Books I'd like to read this year, and the South African entry in my current Around the World in 52 Books. I'd highly recommend it for either. Oh, and I think Nadine Gordimer won the Nobel Prize for Literature (which I just confirmed on Wikipedia; she won in 1991), so we can add that to the major award winners that I've read in my lifetime too. Whew. Kind of like a bird life list for bookish peeps.
at January 08, 2008

This sounds fantastic. One down off your 52 list already!

'Waiting for the Barbarians'... That's the one I couldn't get through for some reason. Nice meeting you today. Thanks for the pickle.

I don't know. I found the POV changes sort of annoying (especially when the story was written in the voice of july's wife). I did like th epower dynamic between Maureen & July after they get to the village, but overall it didn't really raise any new questions for me.

the again, I read this book approximately 7 years ago...

When I read this I sort of missed the "dystopic" point of it, and thought it was based on historical fact. As you can imagine I was confused for a while.