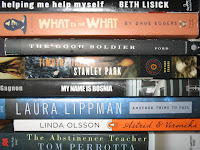 So, this is the stack of books I brought with me on vacation. Maybe a bit too ambitious, but I did read 5.5 of them. Not bad, eh? At one point, I was so totally engrossed in The Good Soldier that my husband and friends marveled at how I totally ignored them until I had finished the last page. Ocean? Waves? Wha?

I know, I know, before anyone actually says it, I should never read the ARC of the LAST book in a mystery series before reading the first, well, many books. But after loving Laura Lippman's What the Dead Know this summer and being utterly giddy at the sight of her cameo in the first episode of The Wire this season (why are you not watching that show? Go. Right now, stop reading and start watching, honestly. It's the best show television has ever produced in my lifetime.), I couldn't help myself. I grabbed a copy off the publicity shelves and snuck it out before anyone could notice (yes, yes, I replaced it when I got back to work and my own copies arrived). Annnywwaaay. It's a Tess Monaghan novel. Once a fearless reporter for a Baltimore newspaper, Tess is now a private investigator, and in this book she's charged with the protection of an uppity actress who seems to be causing all kinds of problems on the set of the HBO series in which she stars. It's a taut, action-packed, first-rate detective novel that hooked me from start to finish. And I have to admit, the tongue-in-cheek references to a certain production currently filming in the so-called Charm City, were all kinds of wicked fun. Plus, isn't the cover bloody gorgeous?

I came home convinced that my life needs more Tom Perrotta. My friend Randy gave me the ARC for The Abstinence Teacher back in the summer and it's taken me a few months to get here, but I am so glad that I took this book along with me and had the chance to give it the attention it deserved. Perrotta has such a gift for capturing the nuances of American life, the contradictions, the confusions, the Christian right in battle with the more liberal left, while ensuring that his characters aren't sacrificed in anyway for the overall themes conveyed in the story, that it's impossible to put the book down after you begin.

The book's two main characters: Ruth Ramsey, a sexual education teacher convinced that proper information and open honesty are the best tools she could possibly equip herself with in terms of her job; and Tim Mason, an addict turned born-again Christian who coaches the local soccer team Ruth's younger daughter plays on, find themselves in very adult and very difficult situations when it comes to their own families, their lives, and their careers. The themes in this novel, of how religion is polarizing much of the States, and the evaporation of the middle class, never overpower the story of Ruth and Tim's friendship. But they certainly make you think twice about the state of our society as a whole, which might be a bit heavy for the usual beach fare (goodness I counted a lot of Da Vinci Codes, honestly), but not for me. Highly recommended.

The Swedish entry in my Around the World in 52 Books, Sam lent me this novel before I left and it was a last-minute addition to the vacation pile. Veronika, a young writer who has just suffered a terrible tragedy, arrives at her rented cottage adjacent to a small Swedish village to find her only neighbour, Astrid, is nothing like the "witch" she was told lived in the house next door. The two women, separated by an entire lifetime, form a fast and furious friendship that allows each to free themselves of the ghosts plaguing both of their pasts.

Linda Olsson's novel is sweet and tender as the two women reveal themselves to one another through their stories. I have to admit that I found Olsson's storytelling a bit cloying: "Oh, let me tell you that story", but the further I drifted with Astrid, the more I enjoyed her character, and realized that the book means for you to find it awkward at first, just as all friendships are, until it's as if you've known the person beside you all your life. And the setting, especially Astrid's house and its descriptions, well, they absolutely made me think of Per Petterson's Out Stealing Horses, and good grief did I love that novel. The landscape is rich and overall I did enjoy this book. One I never would have read if not for my challenge. And isn't that always the point?

My friend Kat recommended this book to me when we were discussing Russian novels for my Around the World in 52 Books challenge. I'm pleased I picked it up last year on a whim, because it fit nicely with my quest to finish The Canadian Book Challenge. As the book's author, Madeleine Gagnon, is from Quebec and part of the novel takes place outside of Quebec City and in Montreal, it's my book for that province. Gut-wrenching and unbearably sad, but hopeful by the time you get to the end, it was another book, like Astrid and Veronika that took me aback in terms of the writing style (but that could be down to the translation). The story of a young girl, Sabaheta, who comes out of the forests surrounding Sarajevo after the death of her father and changes her name to Bosnia, her journey, both emotional and physical, is epic as she tries to escape the war. Heartbreaking, that's a good word for this book, just heartbreaking.

Saving the best for last, of course. After many, many false starts, I was determined to bring Ford Madox Ford's classic novel with me so I would absolutely have no choice but to finish. I've mentioned, at least two or three times on the blog before, how much I love the first sentence of this book: "This is the saddest story I have ever heard." And considering the man telling the story, John Dowell, is also central to its plot, setting it up this way immediately clues one to the fact that he's an utterly unreliable narrator, and isn't that just delicious. When we first meet John, he's still in love with his wife, a woman with a bad heart who needs constant caretaking and long, restful periods spent at Nauheim. An American couple of a certain stature, the Dowells count themselves lucky to find company with the Ashburnhams, an upper calls British couple who also vacation for their health. "The Good Soldier" of the novel's title refers to Ashburnham, and the further we go into the utter depths of why it's such a sad story, the more we uncover, or discover, rather, that nothing is as it seems, either with the Dowells or the Ashburnhams.

Indeed, it's the saddest story I'd read in a while, but the writing is just so exact and so true, and the narrative so utterly engaging that I am ashamed to have put the novel down so many times before actually finishing it. I earmarked passage after passage of prose, and even pressed the book to my chest and uttered a few, "oh no's" while reading in a totally melodramatic fashion as I grew cold on the beach when the sun started to go down, and literally refused to speak until I had finished. Part of my own 1001 Books challenge, I utterly agree with the inclusion of this novel on the list, and if I were still studying, I think I would devote pages and pages to the effectiveness of Ford's unreliable, utterly immovable and somewhat (if I'm being honest) idiotic narrator.

Whew! It certainly was a lot of very good reading. Good, I love vacation. I started What is the What on the last day we were there, and I'm this-close to finishing. So it was 5 Beach Books, Ragdoll styles on vacation last week.

PHOTO IN CONTEXT: The stack of novels on my hotel room bed.

READING CHALLENGES: Oh, almost too many to list: 1001 Books, The Canadian Book Challenge, Around the World in 52 Books, it was a great catch-up week.
at January 31, 2008

What a vacation! I have read the first paragraph of The Good Soldier so many times; I must read it. Must. I've actually never heard of My Name is Bosnia. Now I want to pick it up. It sounds like something a little out of my regular reading track.