TRH Movie - I Am Legend 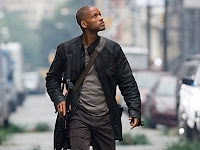 Goodness. Note to self: should only see scary movies with RRHB to grab on to because poor Zesty and I were quite beside ourselves by the end of the 101 minutes. Overall, I really enjoyed I Am Legend. It reminded me a lot of 28 Days Later, just like Charidy from work said, and Children of Men (my favourite film of 2006). In some ways, I think the marketing for the film might be doing it a disservice, positioning the film as some sort of Will Smith post-apocalyptic situation, man vs. environment kind of thing, but the movie runs deeper than the trailer or posters might have you think.

Smith plays Dr. Robert Neville, a Lt. Col. who remains in New York to battle the human disaster inflicted by a cure for cancer that goes awry -- devolving people into zombie/vampire-like creatures that cluster in hives and feed. Once the virus goes "airborne" the entire population of the Earth is almost wiped out, save the 1% who are curiously immune to the virus, and those who have managed to stay alive despite now becoming food for the "nightstalkers". His motivation for staying behind is noble -- modern science created the situation, and he's looking for a cure, which he believes can only exist at Ground Zero. But there are emotional reasons for his actions as well, many of which come to light during flashbacks to the moment when the government closed off "the island" of NYC from the rest of the country.

Like Children of Men, what scares me most about films like this is how rooted they are not necessarily in fact, but in the very near distant future. It's the ease with which humanity as we know it can be destroyed that stays with me and makes me think about how tenuous the grasp of civilization is on society in general. It's all very philosophical, I know.

But in a sense, I heartily disagree with Owen Gleiberman, who said, "Let's be honest: The peril of infectious disease, while quite real, is hardly the anxiety of the moment." In that I don't think the point of the film is to comment necessarily on the peril of infectious diseases, but the pace in which the modern world wants to tinker with nature and take it to an edge, thinking that we'll inevitably win. That our actions have no consequences, and in dealing with those actions, there's a responsibility to find the parts worth saving and hang on to them. If we look at it that way, there's no doubt that the themes of the movie are incredibly relevant to the global conversations of today about cloning, pandemics, environmentalism and a whole host of other socio-political debates.

Annywaay, back to the movie. Smith's performance is solid, even heartbreaking in parts, and the movie was paced well enough that boredom in the form of the Tom Hanks-type in Cast Away never sets in. The special effects, beyond the fairly typical looking CGI creatures, are truly magnificent in terms of the look and feel of an the accidental wilderness of the reclaimed New York City. Some of it's a bit over the top, but I appreciated it none the less (and I'm thinking of just one scene in particular that I won't spoil here). Completely worthy of gift certificates on a Saturday afternoon.
at January 06, 2008